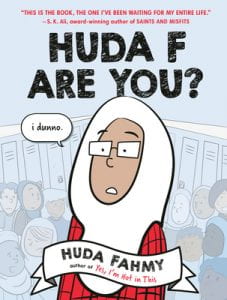 Huda F (a self-described “extension” of author-illustrator Huda Fahmy) is “just your friendly neighborhood Arab-Muslim hijab-wearing American whatever” entering the ninth grade in Dearborn, Michigan. Despite these labels, Huda isn’t sure who she really is or even who she wants to be. She tries to form a friend group while establishing her true personality, but discrimination and microaggressions take a toll on her well-being (and her transcript). Despite the seriousness of these issues, Fahmy brings a light touch and plenty of self-deprecating humor to Huda’s predicament. For example, she depicts Huda’s inner monologues through two mini-Hudas on her shoulders, one in a leather jacket, bickering over her decisions and delivering brutal honesty. Huda’s journey from self-loathing to self-acceptance is portrayed through simple drawings, uncluttered backgrounds, and a limited color palette. Narration boxes and Huda’s delightful facial expressions move the action along to a satisfying conclusion.

THOUGHTS: Huda F Are You is funny, unexpectedly universal, and an excellent choice for fans of Almost American Girl by Robin Ha.

Huda Fahmey, along with her four sisters and her parents, have moved to Dearborn, Michigan, a town with a large Muslim population. This is a big change for Huda: in her old school, she was the only girl who wore a hijab, but that is not the case in Dearborn. While Huda is proud to wear her hijab, she is also aware of the prejudice she faces while wearing it, even from some of her high school teachers. Because of this, Huda sets out to learn more about her religion and figure out what it means to wear the hijab. Since she is no longer the only hijabi girl, Huda has absolutely no idea who she is. Huda tries to figure out who her friends are, what cliques she might belong to, and where she fits in. Academically, Huda is a stellar student, but that doesn’t seem like quite enough to encompass an entire identity. She categorizes herself as “miscellaneous,” a label that makes Huda feel as though she is a nobody. With the help of her friends and family, she begins her journey to find out Huda F. she is.

THOUGHTS: Huda Fahmey’s semi-biographical graphic novel is funny and relatable. This is an absolute must-buy for secondary libraries. Be aware that the title may raise some eyebrows, but there is no strong language in the content of the book. 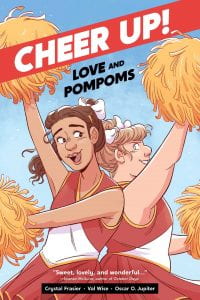 Annie Ginter is a stand-out student, but her “lopsided” transcript lacks clubs, sports, and other extracurriculars. In an effort to improve Annie’s teamwork skills, her mom encourages her to go out for cheerleading. Beatrice (“Bebe”) is a very popular, people-pleasing trans girl. Her parents only will allow her to continue her transition if she maintains excellent grades. The two girls, who were close friends as children, become reluctant allies as they realize that they can help each other with their respective problems. Annie tutors Bebe in history, while Bebe assists with Annie’s physical conditioning and interpersonal skills. As they spend more time together, a romance blossoms. This impressive graphic novel delivers a fresh spin on an opposites-attract story arc, and illustrator Val Wise depicts each character in the diverse ensemble cast with unique details and a distinct personality. Cheer Up also addresses issues such as consent, boundaries, agency, and microaggressions organically within the storyline

THOUGHTS: A sports angle, a very Gen Z romance, and a Homecoming Day to remember make this a widely appealing graphic novel!