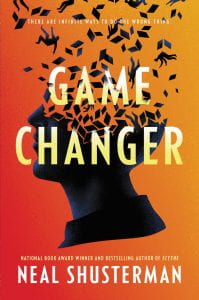 Ash lives a pretty normal life as far as teenagers go. He has a younger brother, a crush on a girl, and a starting spot on the school’s football team. Unlike his best friend Leo, he really doesn’t think too hard about things like race or equality because he doesn’t have to – the world is laid out in front of him and he just has to live it. Unfortunately, that world is altered when Ash takes a hard hit during a football game. A rush of ice through his veins accompanies a universe shift as Ash jumps into another dimension; while many aspects of Ash’s life are the same, many things have changed! Stop signs are blue, his parents are rich, and… segregation in schools is the norm. Leo is Black, which means in this universe, Ash and Leo never became friends. In this universe, Ash’s life is significantly better yet also significantly worse, so Ash wants to get back to his original dimension…or perhaps, an even better one. As Ash tries to figure out how to put his world back together, he questions what he has always known and realizes he needs to shift his thinking.

THOUGHTS: Neal Shusterman has always been a young adult favorite, and this book is no exception. With an engaging plot line, relatable characters, and funny quips in dialogue, students will enjoy this book immensely. This is a fantastic purchase for high school libraries.