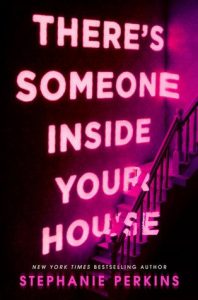 Makani Young has recently moved from Hawaii to Indiana to live with her grandmother, after being involved in a bullying incident at her last school. Makani has sworn never to tell anyone her shameful past and doesn’t really love living in rural Indiana. In her new town, she has only a few close friends, Darby and Alex, and mainly looks after her grandmother, who has trouble with her memory. Makani also pines for her classmate Ollie, who has a troubled past of his own. When a talented classmate is brutally murdered, the town mourns and tries to move on. But as more and more students begin to die at the hands of an alleged serial killer, Makani and her friends try to discover who is killing, and why, before they become the next victims.  THOUGHTS: Perkins weaves an intriguing story, and at one point every character is a viable suspect. A perfect treat for horror fans that keeps you guessing until the very end. 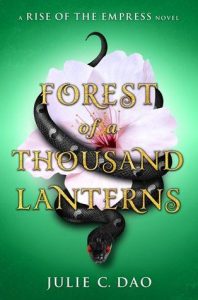 Eighteen year old Xifeng has lived with her cruel aunt, Guma, for her entire life and is often beaten for stepping out of line. Xifeng is resentful and often dreams of running away with her secret lover, Wei. While she and Guma embroider for a living, Guma assures Xifeng that her destiny is much greater; she has seen in the cards that Xifeng’s beauty and cunning will one day get her a powerful position in the kingdom, but only if she embraces the dark magic deep inside her. One day after a particularly horrific beating that disfigures her face, Xifeng and Wei set off for the Imperial City hoping that Xifeng can enter the Empress’s services as a lady-in-waiting and eventually fulfil her destiny. As time passes, Xifeng struggles to maintain friendships, navigate the treacherous eunuchs and concubines at the palace, and also with the darkness lurking under her skin. Xifeng is a complex anti-heroine whose character will linger with readers long after the last page. Dao’s debut is a polished and masterful Asian-inspired retelling of Snow White’s Evil Queen. THOUGHTS:  A beautiful, lush story with complex and diverse characters will delight readers. Julie C. Dao has written an engrossing and refreshing fairytale retelling that belongs in all libraries. 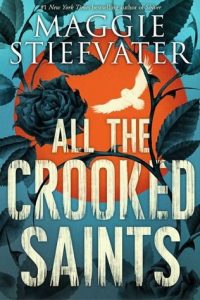 In the small town of Bicho Raro, the primary industry is miracles. The Mexican-American Soria family carries the burden of sainthood, blessed or cursed, with the ability to grant a miracle to each of the pilgrims who wander into the town. However, the miracle the Sorias grant only manifests a pilgrim’s darkness into an external entity. It is then up to the pilgrim to commit the second miracle, and banish the darkness. Lately, however, the pilgrims have not been able to accomplish the second miracle, and the Soria enclave is overflowing with a motley assortment of pilgrims struggling with their manifestations. Young Daniel Soria, the 19-year-old current saint, and his cousin Beatriz, know this situation has to change, but they will have to break the Soria code to do so, which may destroy the family.  Glorious wordsmith Stiefvater has crafted another magnificent story, more tall-tale than fantasy. Populated with a memorable cast of characters, from the Soria clan to pilgrims to the accidental visitors to the town, the book shows us the darkness in all of us, and the miracles needed to banish it.  THOUGHTS:  Stiefaver successfully departs from her myth-based fantasy genre with this beautiful read. The large cast of characters can be challenging to keep straight, but the reward is great. 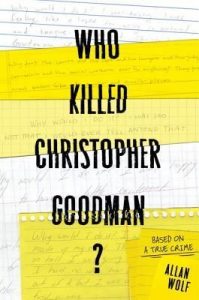 Set in the fictional town of Goldsburg, VA, in 1979, this well-written novel follows the intersecting paths of six teenagers leading up to the murder of one of their classmates following the town’s big summer festival.  The perspective alternates among the six teens, each of whom has different relationships with the eventual murder victim and each of whom ultimately reacts to the murder differently, wondering if their actions were at all to blame for the death of Christopher Goodman.  Based on the actual 1979 murder of Edward Charles Disney following Deadwood Days in Blacksburg, VA, this thought-provoking novel will encourage teenagers to think about the reasons behind their actions and how these actions can have rippling effects that may never be entirely known.  THOUGHTS: Reluctant readers, fans of mystery/suspense, and fans of Wolf’s previous release, The Watch that Ends the Night, will enjoy this title.  It might also be interesting to introduce this book in a social studies class.  It could prompt an interesting character study discussion in a psychology course, or U.S. history students could research the actual murder of Edward Charles Disney and compare the real-life events to those in the book.  A solid addition to any high school collection.