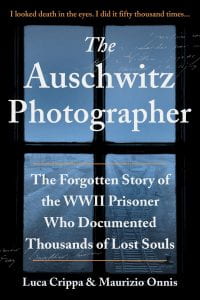 Based on an obscure obituary and an interview in a BBC documentary filmed in 2009, the authors of  The Auschwitz Photographer: The Forgotten Story of the WWII Prisoner Who Documented Thousands of Lost Souls develop a story of life in Auschwitz Concentration Camp focusing on the young, talented photographer, Wilhelm Brasse. A political prisoner for five years in Auschwitz, Brasse clings to his mother’s Polish heritage rather than his father’s Austrian one and refuses to join the Wehrmacht. After a year or so of crematorium duty, Brasse and several other political prisoners are selected to man the Identification Services. Twenty-three year old Brasse stands out as a leader and the tactful liaison between the photography studio and the Nazi commandants. Slowly and meticulously, the book chronicles his photography sessions starting with the incoming Jewish prisoners, political prisoners, and those marked “A” for anti-social behavior. He treats his subjects humanely, knowing he can do nothing to deter their inevitable deaths. Eventually, the SS enlist Basse in particular to photograph the unethical medical practices of Mengele, Clauberg,and Wirths, whose experiments on twins, tattoos, reproductive organs, eyes epitomized man’s humanity to man. Through the dense narrative, the reader learns of the fear, deprivation, and shame prisoners felt, but also their courage and sacrifice (Brasse recounts viewing the now Saint Maximillan Kolbe, a Fransciscan friar offering his life in place of a distraught prisoner). The Identification Service also becomes an agency for officers to have their portraits preserved for loved ones. Brasse coaxes his subjects to show a softer, other side by recalling childhoods in pastoral settings and dignifies the request of a beautiful female SS auxiliary officer to be photographed partially nude. In the latter years of his imprisonment, Brasse smuggled some photographs to the Resistance. When the coming of the Russians marks the impending doom of Auschwitz, Brasse defies the commandant’s orders to burn the photos in favor of a younger assistant’s suggestion to scatter thousands of photos and negatives around the office before jamming shut the building’s doors. His hope was to preserve them for whomever may find them when the war ended. Brasse survives the war, but the memories of the horror he documented are burned indelibly in his soul. Endnotes contain epilogue of major players in the narration, Readers’ Guide, and some photos of prisoners and the camp. All persons in the book are Caucasian.

THOUGHTS: Categorize this book with World War II, Holocaust materials because the reader learns little of Brasse’s past or future to classify it as a biography. The authors focus on Wilhelm Brasse’s activities as a political prisoner at Auschwitz, but in doing so, reveal a different view of camp life, the treatment of the SS and kapos toward Jewish prisoners, and a glimpse into the personalities of Nazi officers. The descriptions of the brutal medical experiments are graphic though not prolonged, but may be too much for sensitive middle school students. The text is very detailed and may find optimum use as a resource for research of that time period.