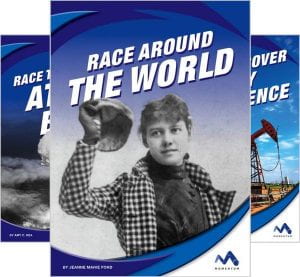 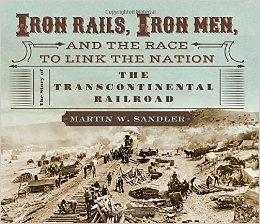 Sandler, Martin W. Iron Rails, Iron Men, and the Race to Link the Nation: The Story of the Transcontinental Railroad. Somerville, MA: Candlewick Press, 2015. 978-07636-65272 211 p. $22.99 Grades 5-8.
“You can’t stop progress,” so the saying goes, and this was progress, indeed. As early as the 1830s, the idea of a transcontinental railroad appealed to many, and by the 1860s the idea had lost some of its dream quality to become a possibility. Sandler introduces the perfectly positioned individuals who mapped the route, secured the funds, and directed the work of thousands of men, many of them immigrants. As the plan unfolded, the push became stronger for one of the two Railroad companies to win the race—the Central Pacific heading for the East from Sacramento, and the Union Pacific heading for the West from Omaha, to meet at Promontory Summit, Utah. The hurdles were massive: workers, weather, mountain ranges, desert, illness, and fatigue, but the vision and the competition kept them moving. Sandler expertly weaves the stories of the managing men with the progress made. He does not hide the ugly side of the changes: the bigotry against the Chinese immigrants, and the invasion of Native American land and way of life. The text is wisely broken by interesting full-page sidebars on the men, period photographs, and maps showing the progress from both companies. In the end, the railroad reduced the cross-country trek from six months to one week. This is a tale of perseverance, vision, and hard, hard work. Back matter includes an epilogue, timeline, source notes, bibliography, photography credits, and an index (pp. 183-210). A discussion Guide is also available from Follett. THOUGHTS: A strong non-fiction narrative account of a life- and nation-changing endeavor. This will give readers a flavor of the times and the amazing and devastating outcomes of the Transcontinental Railroad project.
385 Transcontinental Railroad       Melissa Scott, Shenango High School 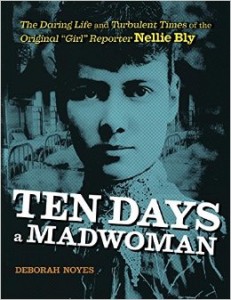 Noyes, Deborah. Ten Days a Madwoman: The Daring Life and Turbulent Times of the “Original” Girl Reporter Nellie Bly. New York: Viking, 2016. 978-08037-40174 144 p. $18.99 Grades 5-8.
Elizabeth Jane Cochran, known to family and friends as “Pink” became known to the world through her journalism as Nellie Bly. Noyes opens her book with a focus on Bly’s journalistic stunt that brought her instant fame: be committed to an insane asylum and report on the conditions there. Never one to back down from a challenge—her own or anyone else’s—Bly completed the assignment, not without a good deal of fright, which she easily shared with readers: “Who could tell but that the strain of playing crazy and being shut up with a crowd of mad people might turn my own brain and I would never get back” (19). Her honesty, her daring investigation, and her focus on the personal suffering revealed many cruelties: “…take a perfectly sane and healthy woman, shut her up and make her sit from 6 a.m. until 8 p.m. on straight-backed benches, do not allow her to talk or move during these hours, give her no reading and let her know nothing of the world or its doings, give her bad food and harsh treatment, and see how long it will take to make her insane” (58). “What, excepting torture, would produce insanity quicker than this treatment?” (53). This reporting also catapulted her to fame and wide readership –“a full-time job at [the New York] World and her own byline, quite an achievement at a time when most newspaper reports ran anonymously” (69). A host of imitators sprung up as well. Noyes gives the most time to Bly’s undercover work in Blackwell Island Lunatic Asylum and to her widely followed “round the world in 80 days” work (she did it in 76 days), leaving many other assignments breezily covered (who wouldn’t want to read more of her World War I reporting, or social work uncovering inequality and scams?). Noyes follows Bly’s personal life—her astounding marriage, at 30, to 70-year-old businessman and millionaire Robert Livingston Seaman. After his death, she successfully managed his Iron Clad Manufacturing Company and was proud of it. Reading Noyes’ work, it is easy to believe that Bly is unstoppable, which is all the more remarkable when Noyes relates the sexism of the time. “If you want to do it, you can do it. The question is, do you want to do it?” She did it. THOUGHTS: Well-researched, well-written, and well-packaged, this is a must-have for any middle and high school, especially schools in Bly’s native Pennsylvania.
92 Biography               Melissa Scott, Shenango High School