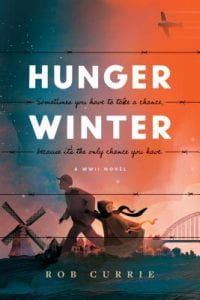 In late 1944, 13-year-old Dirk’s father has gone into hiding as a leader of the Dutch Resistance against the Nazis. The chase begins immediately; in chapter one, Dirk learns via a neighbor that his older sister Els has been captured by the Gestapo, to question and torture for information, and to encourage their father’s cooperation. Dirk knows his next move must be to escape with his younger sister, six-year-old Anna, to their grandparents’ home, but questions and worries bombard his mind. Chapter two reveals Els’s perspective as she is starved; questioned; threatened; and worries for her father, brother, and sister.  Most of the story is Dirk’s, but returns to Els’s point-of-view in the final chapters. This tense novel reveals the strength of the Dutch people during what became known as the “Hongerwinter” when Nazi control of resources led to daily food rations of a mere 320 calories per person. Dirk must call upon memories of his father’s instructions and strength to guide him through difficult decisions on his journey, while shielding Anna from the brutal realities of war as best he can.

THOUGHTS: This is a middle-grade novel a step up in complexity and danger for readers who loved Number the Stars and The Devil’s Arithmetic. It will expand readers’ knowledge of Nazi tactics and brave Dutch resistance. An inspiring read.