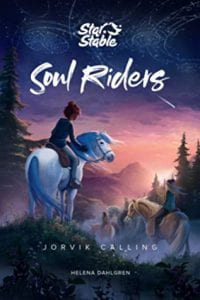 Lisa hopes the move to the remote island of Jorvik will be what she and her father need to reestablish their relationship. The 15-year-old’s mother was killed three years ago in a horseback riding accident, and her father accepted this new job so the pair could spend more time together. But when her father is immediately called into work, Lisa finds herself on her own to explore the island. She is drawn to nearby Jorvik stables, even though she lost her love of horses after her mother’s death and hasn’t been on a horse since. Lisa is quickly accepted into a circle of three girls her age at the stable, and their gentle friendship, along with a deep connection to a native island horse, Starshine, encourages her to ride again. However, evil lurks on the peaceful island. A mysterious, sinister man and a pair of teen girls seem determined to injure or steal the horses of the four friends. Eventually, the girls uncover a local myth of the Soul Riders, four ancient riders associated with certain symbols and powers. Could there be any connection between what is happening to the girls and these ancient beings? This mystical story, associated with an online immersive adventure game, is perfect for horse-crazy tweens. The theme of overcoming adversity through friendship is prevalent throughout the book, woven into an adventure tinged with mythology and danger. Mysterious individuals and uncovered magical abilities add interest to the story, but the real star is the love between girl and horse. Although there is a limited amount of character diversity, as Jorvik is somewhere in the North Sea, apparently near the Scandinavian countries, one of the girls is Pakistani. The second book in the trilogy, The Legend Awakens, was published in September 2020, and the final book is due out in April 2021.

THOUGHTS: This series could have wider appeal among fantasy readers not ready for lengthy, multi-volume series, but it will mostly resonate with horse lovers. The Star Stable online game does require fees to play after a trial period. 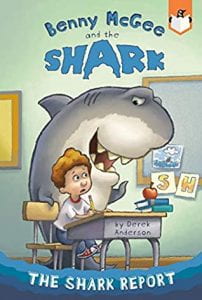 Benny McGee is scared of swimming in the ocean because of sharks. He knows a lot about sharks because he is learning about them for a school report. When a shark appears at his house, Benny doesn’t know what to do. His father suggests Benny invite the shark in, so he does, thus beginning his friendship with the shark. When Benny’s shark report is due and he realizes he never wrote it, he decides to take Mr. Chompers with him to school as his report. But, Benny forgot today is also the day the deep-sea fisherman is scheduled to visit his class.  When the deep-sea fisherman sees Mr. Chompers, Benny must decide which is more important: his report or his new friend.

THOUGHTS: This early chapter book is a fun, fact-filled read.  Anderson includes lots of accurate information about sharks while keeping the narrative light-hearted. Emerging readers will enjoy Mr. Chomper’s shenanigans while also connecting with Benny’s fears and how he overcomes them. Book 2 of Benny McGee and the Shark, We are Famous, is also available now.