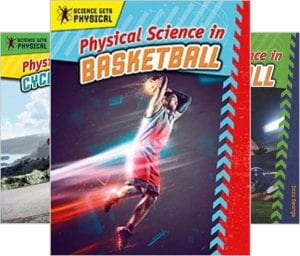 Science meets sports in this series aiming to educate readers about the science behind popular sports. Organized into six chapters, each book explains how physics plays a part in the technique and function of each sport. Each book includes a science experiment readers can complete at home to gain a real understanding of the physics explained in the previous chapters. Glossary terms, Learning More, and Index sections help readers understand and navigate through the nonfiction text as well as encourages readers to learn more about the physics of sports. There are plenty of sidebars and photographs that highlight how the scientific theories explained in the text are demonstrated in the real world through contemporary sports.

THOUGHTS: A useful text for athletes seeking an advantage on their competition and for students eager to learn the science behind popular sports. It is a good addition to a collection of sports books and a good offering for teachers of physical science to share with students who may be reluctant to learn about science. The text and captions are easy to read and informative while the colorful, modern photographs make the information feel relatable. 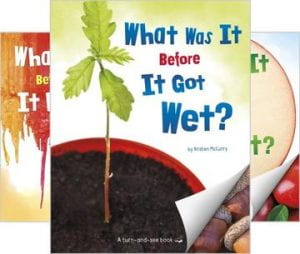 These “turn and see” books encourage critical thinking in the very young. What Was It Before It Got Wet presents readers with vibrant close-up photographs of a wet substance, and challenges them to identify what the substance was in its dry state. Many of the illustrations are of familiar items – soapy lather, hot chocolate – but some are more challenging to recognize, including a drenched koala. A photo of a seedling may really stretch young minds to determine the answer. The graphic design of the volume is gorgeous, with bright “what was it?” photos set off by wide margins, and answer photos on the reverse side full-page images.

THOUGHTS: This book begs to be read one-to-one, with enthusiastic discussion to ensue. 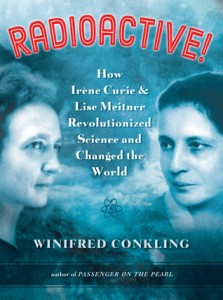 Radioactive! is a dual biography of two women, Irene Curie-Joliot and Lise Meitner, who were pioneers in the field of nuclear physics.  Irene Curie was the daughter of  famous parents, Marie and Pierre Curie.  While the elder Curies were known for their pioneering work on naturally radioactive elements, Irene and her husband, Frederic Joliot, discovered artificial radioactivity (i.e., that a stable element could be bombarded by radioactive particles to form new radioactive elements).  Irene and Frederic Joliot-Curie’s work led to a deeper understanding of the atom, and Lise Meitner relied on this understanding to discover nuclear fission.

Radioactive! goes beyond scientific theory to look at Curie-Joliot’s and Meitner’s life circumstances.  The fact that both women lived in the early 20th century kept the world from realizing the breadth of their achievements.  For example, Irene and Frederic Curie-Joliot won the Nobel Prize in Physics, but Irene was never allowed to join the French Academy of Science.  Meitner  faced an even greater challenge as an Austrian of Jewish ancestry working in Germany during World War II.  Ultimately, Hitler’s policies forced her to flee Germany with little notice (even though she was a practicing Christian).  She left her lab and experiments behind.  Her male colleagues thought nothing of taking credit for her work.

THOUGHTS: Radioactive! is, first and foremost, a biography about two very interesting women.  Some basic background is given into the science of nuclear physics, but readers looking for a scientific volume may be disappointed.  This book is an essential purchase, however, for any school looking to promote awareness of women in science.

At first, this book seems to comprise two discrete biographies about women researchers in the field of nuclear physics.  However, Curie-Joliot and Meitner’s lives, although separate and geographically distant, intersected on many occasions.  The two women experienced many of the same triumphs and frustrations.  Both were painfully aware that science and politics are entangled, and both were horrified that their discoveries were used to create one of the most deadly weapons known to mankind (the atomic bomb).  Winifred Conkling’s writing style is conversational, which made this a quick read.  Radioactive! was also well-researched; there are a number of primary source documents, informative charts, a time line, and a who’s who of famous scientists in the field of nuclear physics.  This was a thoroughly enjoyable book. 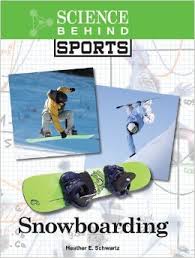 Lucent expands their Science Behind Sports series with the addition of these nine titles.  The purpose of the series is to educate readers about the scientific ideas and concepts behind many of today’s most popular sports.  Each volume opens with background information on the history of the sport (and equipment used in the sport).  Additional chapters cover topics such as biomechanics, and health and medical concerns relating to the sport (including nutrition and sports-related injuries).  Physical science concepts (velocity, acceleration, kinetics, etc.) are explained and related to the each sport.  Diagrams, charts/graphs, and sidebars are utilized to supplement the text.

I had the opportunity to review the Cycling volume, which discussed physical science concepts such as momentum, aerodynamics, balance and steering.  One chapter discussed bicycle components such as the bike frame, brakes, tires, rims, etc.  Additional chapters presented information on muscles used when biking, the importance of proper nutrition/diet, and the topic of performance enhancing drugs and cycling.  Overall, I was impressed with the quality and comprehensive nature of the volume.  The text was very readable and the scientific concepts were presented in easy to understand language and supplemented by clearly-drawn diagrams.  This series could be of interest to the casual reader as well as the student researcher.