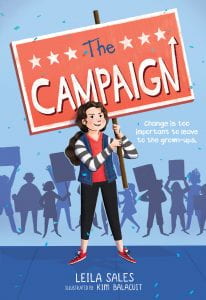 Seventh grader Maddie Polansky loves school for one reason, art class. A bit of an outcast and troublemaker with the other students and most teachers, Maddie shines when participating in art. When she finds out that the only candidate for mayor of her town wants to slash the art budget, Maddie decides to get political and recruit her 23 year old babysitter, Janet, to run for mayor. Since Janet just graduated from college and has never had a job other than babysitting, the campaign is facing an uphill battle! But campaign manager Maddie recruits her classmates and runs a campaign that winds up beating her former Olympian, experienced town council competitor. In today’s day and age, this book shows that being a troublemaker is exactly what Maddie’s town and school needs.

THOUGHTS: I loved this book! This illustrated novel is perfect for an election year.  It brings just enough of a political vibe for middle schoolers, while addressing issues such as educational funding, homelessness, and community issues such as understaffed Public Works Departments. Issues are brought to light through the eyes of voters, highlighting the fact that everyone votes for the issues that they care about.