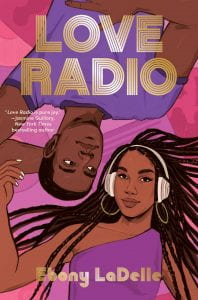 Danielle Ford’s romantic mother has a big wish for her only child, to experience a great love story. That wish struggles to come true in Ebony LaDelle’s, Love Radio, a debut novel that is as much a homage to the great city of Detroit as it is to first love. High-achieving senior, Dani has been shut off from her friends and dating after a traumatizing sexual encounter with a college boy the previous summer. Keeping this secret from her besties and devoted parents, she buries herself in writing the perfect college essay to get into her dream school, New York University (NYU). When she has an awkward meeting in the library with classmate, Prince Jones, a popular teen disc jockey and local radio personality (DJLove Jones) who mixes love advice with music, she makes an assumption she regrets and wants to rectify. Told in alternating voices, the romance between Prince and Dani is enchanting. Prince shows a maturity beyond his years, perhaps because he has accepted much of the responsibility of taking care of his seven-year-old brother Mookie and household duties since his single mother received her diagnosis of Multiple Sclerosis (MS). Prince has fallen hard for the guarded Dani and is determined to make her fall in love with him in five dates. After inviting himself over to her comfortable home to take out her braids, he plans two movie-worthy dates to a roller rink and bookstore. Dani starts to open up, reconnect with her friends, and dissolve her writer’s block. When she reciprocates with one equally perfect date to the Motown Museum, though, their intimacy triggers bad memories and she breaks it off with Prince. As Dani faces her trauma, she has the support of loving parents and patient friends as well as the therapy of writing unsent letters to her literary idols, Toni Morrison and Maya Angelou. Prince, too, acknowledges his need to suppress his dreams because of his home obligations and, with help, makes a plan for his future. Both characters come to realize that they are surrounded by a network of loving people who will support and help them achieve their goals. Characters are African-American.

THOUGHTS: Students in the mood for a dreamy romance will eat up this book. The author has an ear for teen dialogue and is from Michigan. Any readers familiar with Detroit will recognize the branding of different places (if I am ever in Detroit, I’m heading for that Dutch Girl Donuts) and the description of the neighborhoods. Dani and Prince are so wise; the thoughtful dates are out of this world; the child to parent relationships are so close. Though the romance doesn’t play out physically much, Dani’s traumatic encounter occurs when she a friend takes her to a frat house where she barely escapes date rape. After several dates, Dani leads Prince to her bedroom and encourages a sexual encounter, but Prince is reluctant to proceed. The portrayal of family is warm and loving, especially the way Prince helps out his sick mother. Though the letters to literary idols seem to be a critical link to Dani’s recovery from trauma, the book names Dani’s idols as Maya Angelou, Toni Morrison, Zora Neale Hurston, Alice Walker, Roxane Gay, Jesmyn Ward in the beginning chapter, but she only focuses on Toni Morrison and Maya Angelou. One of Dani’s friends is sick of appropriation and plans a hair fashion show. Lots of references to music. Some bad language. For those who are sticklers, the timeline is a little wonky: would college kids be on campus in the summer? (maybe).