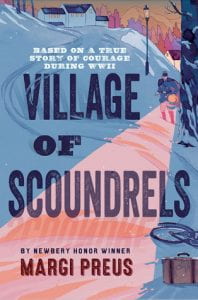 To the people of Nazi ocupied France, every step must be calculated and every risk weighed carefully. In this powerful novel, Preus explores how the young people of France band together in order to smuggle refugees across the border into neutral Switzerland. Henni, a Jewish girl in hiding, helps to protect children by hiding them in the woods during Nazi raids on their hiding spot. Celeste bravely travels across the country to procure items necessary to continue bringing people to safety. Although these girls are brilliant in their work, they also need someone who can provide legal documents and safe travel. Jean Paul is an expert at forgery, and Philippe is knowledgeable with the terrain and how to arrange passage. This group of children will assist the extrication of hundreds of people and stand up for what is right no matter the risk and danger associated with their tasks.

THOUGHTS: This novel is based on a true story and is thoughtfully written. The pages are filled with accurate details and French and German words. The author provides a Cast of Characters (almost like a Playbill) and a pronunciation guide at the start of the book. This proves useful because there are a variety of characters to keep up with, which at times is overwhelming as they jump from person to person within a chapter. A great read for those who enjoy reading historical fiction and the World War II time period. 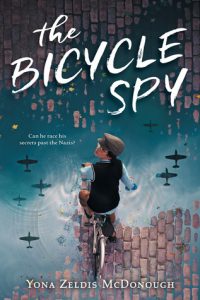 Marcel may be small for his age, but he has big dreams of competing one day in the Tour de France, which has been cancelled for the last two years due to the outbreak of World War II.  Marcel works to improve his cycling technique as he makes bread deliveries for his parents bakery. At school, he makes a friend in Delphine, a new student who shares his enthusiasm for bicycling, but times in his small French town have become tense with arrival of German soldiers. When Marcel discovers a hidden note in one of his bread deliveries, he realizes that his parents are part of the Resistance. His previously carefree bike rides now take on critical importance as he must navigate Nazi checkpoints in order to deliver Resistance communications. When Delphine reveals that her family is Jewish, Marcel and his parents must work with their contacts to arrange escape plans to ensure her family’s safety. THOUGHTS: An excellent historical tale that incorporates a topic (the Tour de France/bicycling) not often featured in juvenile literature. Readers will hold their breath when Marcel must embark on a harrowing bike ride at the conclusion of the story in order to help arrange Delphine’s escape. Historical notes at the end of the book feature an overview of World War II as well as background information on the Tour de France. 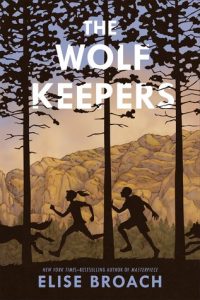 Lizzie lives in a zoo–literally. Her father is a zookeeper at the John Muir Wildlife Park in Lodisto, CA, and Lizzie lives with him in a house on the zoo grounds. Lizzie loves observing and drawing the animals, particularly the wolves. During the summer before 7th grade, Lizzie spends time observing the wolves, specifically the pack leader Lobo, for a homework assignment in which she must journal in the style of John Muir. One day she encounters Tyler, a runaway from a foster home who has been hiding out at the zoo. Tyler tells Lizzie about mysterious happenings going on at the zoo at night in the wolf exhibit. Could someone be behind a mysterious illness the wolves (including Lobo) are beginning to exhibit? Lizzie and Tyler are determined to get to the bottom of this mystery, which ultimately leads them to stowaway on a late night ride to nearby Yosemite National Park where they must spend two days on their own in a remote part of the park, where the stumble across the remains of a cabin that may have belonged to John Muir. THOUGHTS: This book is ideal for fans of animal stories or mysteries. The characters realistically cope with with issues such as loss, friendship and the meaning of family. The ethics of keeping animals in zoos is well integrated into the story and gives readers much to think about. The text is enhanced by pencil drawings and an author’s note that discusses the history of Yosemite.