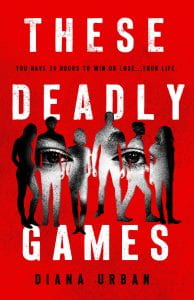 Crystal loves getting lost in the world of multiplayer game Mortal Dusk. Her team is so skilled that they could even overtake a local gaming celebrity in an upcoming tournament. Crystal hopes to do well in the individual contest, as the prize money would go a long way in helping her single mother pay the mortgage. The team of six basically lives in the game world to increase their scores and determine which five players will earn a spot in the team competition. But they all have to go to school too… During class Crystal gets an odd text with a video of Caelyn, her younger sister (who is supposed to be away for a weekend field trip), gagged and bound. The message is clear: “You have 24 hours to win. If you break my rules, she dies. If you call the police, she dies. If you tell your parents or anyone else, she dies.” Initially, filled with shock and disbelief, Crystal flees her classroom to make sure she read the message right. But each new message replaces the last, and she quickly realizes she will go to any lengths, will do anything to rescue her sister. Besides, the game seems fairly harmless at first. When Crystal realizes she has to choose saving her sister or her friends, her desperation increases. Told over a rapid, deadly game with brief flashbacks to a hidden secret, Crystal races against the clock to win what seems like an unwinable game.

THOUGHTS: Thriller and gamer fans will devour this mystery, desperate to uncover who is behind the anonymous messages. If you have April Henry and Karen McManus fans in your library, you’ll want to add Urban’s titles (All Your Twisted Secrets, 2020) too.