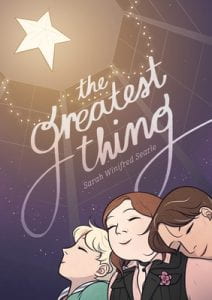 Winifred begins her sophomore year of high school feeling very alone after her two best friends transfer to a private school. She reconnects with an old friend, Mathilda “Tilly” Martel, and makes fast friends with April and Oscar, two students whose photography class overlaps with Win’s independent study period. The trio bonds over music, pop culture, and especially creating a limited edition zine together. Despite these positives, Win wrestles with deep anxiety, self-esteem and body image issues, and disordered eating. For example, she’s lactose intolerant but indulges in ice cream to punish herself for enjoying food. She also struggles with an emerging crush on Tilly … or maybe Oscar? … and wonders if “a relationship would fill the hole that ache[s] in my chest all the time.” When Win’s self-loathing spirals into self-harm, her guidance counselor steps in and recommends professional help. This thoughtful, sensitive graphic novel features softly shaded artwork (created in Clip Studio Paint) that complements Win’s moods and emotions. In particular, the red-tinted darkroom provides a safe space for Win, April, and Oscar to reveal their vulnerabilities.

THOUGHTS: There is so much to savor in The Greatest Thing. Readers will embrace Win’s exploration of her identity, her relationships, and her artwork. Potentially triggering content is handled with great care, and Sarah Winifred Searle includes a list of resources at the close of the book.

Content warning: This book contains depictions of mental illness, including but not limited to addiction, anorexia, self-harm, and trichotillomania.

Moira (Moor-a, not Moy-ra) has been skipping school, meals, and leaving her apartment for hours at a time. Her parents stage an intervention where they share that they’re sending Moira to The Castle School, a school for girls going through a “rough patch” not a reform school. Though two bodyguard types look ready to spring into action should Moira bolt, she willingly packs her things and gets on a plane heading to a remote part of Maine. There she meets eleven other girls who like her are experiencing their own struggles, each unique and told in her own voice in a sporadic chapter throughout the novel. When asked why she’s at The Castle School, Moira reports it’s because she got a tattoo. She does not share that she lost her best friend. With a very regimented schedule which includes lights out and individual therapy sessions, Moira struggles to adjust at first. She has some time on her own, though, as her roommate Eleanor is staying in the infirmary. While reading by a secret flashlight, Moira hears music in the distance and notices that the padlock on her window’s security bars is broken. The next night Moira and Eleanor head out to investigate and discover a castle that seems a lot like theirs, only happier, warmer, and with twelve boys. The Castle Schools may not be what Moira thought. Moira notices that she feels more like herself than she has in a long time when she’s at the other Castle School (Castle South); it seems to have the same effect on Eleanor. What type of experiment is Dr. Prince conducting with two schools run so differently, and why – other than the fact that she’s a girl – is Moira at Castle North? Why does Dr. Prince’s son Randy live at Castle North instead of with the boys in Castle South? As Moira gets to know the girls and attends sessions with Dr. Prince, she struggles through her grief and begins to come to terms with why she’s at The Castle School.

THOUGHTS: Readers will root for Moira as she adjusts to her new life at The Castle School and works through her grief. As an adult reader, I felt like Moira’s semester ended a bit too tidy (though she does work through a lot). I’m interested to talk to a student reader about their thoughts of authenticity. Purchase for high school collections where character driven, mental health titles are popular.