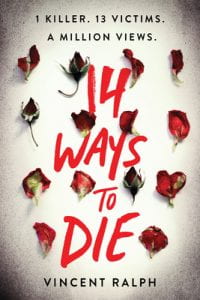 Jessica was seven years old when her mother was murdered by a serial killer known as the Magpie Man. A cloud of grief settles over Jessica and her father in the wake of her death, especially as leads on the serial killer turn cold and the case goes unsolved. But ten years and thirteen more victims later, Jessica has had enough: she wants justice for her mother and the other victims of the Magpie Man. Jessica auditions for a YouTube reality show called The Eye which would allow viewers to watch her every waking minute. A spot on the show would mean Jessica can use the platform to bring attention back to the Magpie Man and, hopefully, find someone who knows something about this uncatchable killer. When Jessica is chosen for The Eye, she begins her campaign right away and bravely puts herself out on the web for the whole world to watch – including the killer. After Jessica starts receiving threats from the killer himself, she realizes the danger this puts her in – and just how close the killer actually is. But until she gets justice for her mother’s senseless death, she isn’t going to stop, no matter how frightening her reality becomes.

THOUGHTS: Vincent Ralph’s book is a gripping thriller that leaves the reader wanting to turn the page and find out what happens next. His chapters are written in short bursts, perfect for keeping readers on edge. This is a fantastic addition to high school libraries, especially for students who are fans of murder mystery books like One of Us is Lying and They Wish They Were Us.