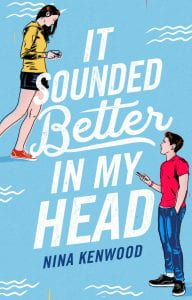 Natalie had a good grip on her life until her parents jovially announce they’re getting a divorce. They’ve known this for months but waited until the Christmas holidays and high school graduation (which coincide in Australia, where the book was first published). A rarity for literature, Natalie has a great relationship with her parents and is devastated by the news and hurt by their deceit. She turns to her support network, her best friends Lucy and Zach. But since they started dating, Natalie sometimes feels like a third wheel. Having suffered through severe, scarring acne during puberty, Natalie has a shattered self image and has not dated. At a party, she connects with Alex, Zach’s older brother, but quickly convinces herself Alex’s interest was an act of kindness perpetrated by Zach. But an accidental case of musical bedrooms at a beach house over New Year’s brings Natalie and Alex back into close proximity, and as they talk they again feel a positive connection. However, Natalie’s lack of confidence and poor self image quickly threaten to sabotage the burgeoning relationship. This engaging book covers a topic not discussed in YA literature, the trauma of severe teen acne, and the scars it leaves, both physical and psychological. Natalie is a bright teen with caring parents and friends, but the long term effects of her acne are evident in her image, (styling her hair to cover which side of her face looks worse) confidence, and self-worth. American readers will need to translate Australian terms and references but will recognize themselves in the three friends as they shakily navigate through the next phase in their lives.

THOUGHTS: A welcome addition to YA realistic fiction collections. While some characters have sex off-page, Natalie and Alex discuss the issue and decide they are not ready.

Eighteen-year-old Natalie is looking forward to her well-planned future: she and her close friends and new couple, Zach and Lucy, will join her in their respective majors at a local Australian university. Perhaps then, Natalie will be able to shed some of the body shame she has from her years with inflammatory, scarring acne and finally experience a love life.

When Natalie’s seemingly loving parents announce their divorce on graduation night, Natalie relies even more on her friends, though she’s feeling more and more like a third wheel. As the trio await their uni placements, they join Zach’s family at their beach house in Queenscliff to vacation and celebrate New Year’s. What follows is a comedy of errors. Going against his house rules, Zach asks Natalie if she will trade rooms so he and Lucy can sleep together. Older brother, Alex, shows up at the beach house in the middle of the night and crashes in Zach’s room surprising both Natalie and himself. It doesn’t help that Natalie has a secret crush on handsome Alex since he gave her a peck on the cheek during a game of Spin the Bottle at a pre-graduation party. As their nights together multiply, romance blossoms. The revelation of the pair as boyfriend and girlfriend causes a ruckus not just in Alex’s and Zack’s family but also in Zach’s and Natalie’s relationship. Natalie’s first-person narrative reveals her insecurities in navigating the new terrain of sex and a boy/girl relationship. Though no graphic sex scenes occur, It Sounded Better In My Head does percolate the angst and delight of true friendship, first love, and new beginnings. Author Kenwood makes this story light and funny and her characters seem very real.

THOUGHTS: Natalie spends a lot of time obsessing over her bad skin and her lack of a love life. Natalie and Alex spend a lot of time talking and kissing in bed during the room switch and afterward. At this time when there are so many serious issues abound, Natalie’s common concerns about friendship, sex, appearance, university, and her parents may seem a bit trite; however, young readers may share Natalie’s insecurities and longings and enjoy her sense of humor. 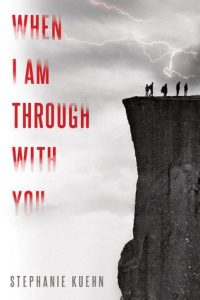 Unreliable from the start, Ben tells the story of what happened on the mountain in his own way, on his own terms, and apparently from his prison cell. So begins Ben’s story and how he got to be on the mountain to begin with.  Suffering from migraines and depression and being the only caregiver for his unwell mother, Ben feels trapped by his life in Teyber. He reconnects with former teacher Mr. Howe to help with the school’s orienteering (exploring) club.  Rose, Tomas, Avery, Duncan, Clay, and Archie join Ben on the first hike into the wilderness. Tense from the start, this group seems to be on a doomed trip. It’s not until the end that readers see just how doomed these adventure seekers are. THOUGHTS: Drinking, drug use, descriptions of casual sex, and violence make this a book for more mature teens. 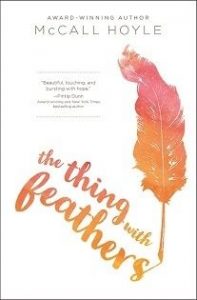 Emilie is perfectly fine staying in the safety of her home with her mom and best friend (her seizure dog). She disagrees with her mom and her therapist: attending public school is not a good idea. She doesn’t want to be known as “that girl that has seizures.” When Emilie starts school, she makes a decision not to tell anyone about her epilepsy. As she gets closer to her friends and a boy she’s paired with her decision not to reveal her medical condition becomes more and more critical. But it’s been months since Emilie seized, so she’ll be okay, right?  THOUGHTS: Readers will fly through this light-hearted and realistic sweet novel about what it means to be different and what lengths we will go to hide our differences. With a compelling storyline – Will she or won’t she tell? Will she or won’t she seize? – readers will fall in love with Emilie as she experiences public school, friendship, and first love. 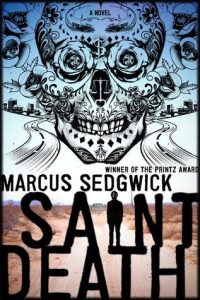 Arturo lives in a shack on the outskirts of Juarez, a Mexican city that butts up against the American border. One day, his childhood friend, Faustino, shows up begging for Arturo’s help. It seems that Faustino has joined a gang and has stolen $1,000 from his boss to send his girlfriend and her baby to America. He must replace this money by the next day or he will be killed. Arturo, a skillful card player, agrees to try to win the money back, but soon finds himself in even more debt. Now, Arturo’s life is also on the line. He scrambles to replace the money both he and Faustino owe before they are both killed by gangsters. Fast-paced and devastatingly honest, this title by Printz award winner Sedgwick is an excellent addition to high school libraries. THOUGHTS: Focusing on taboo topics like religion, illegal immigration, human and drug trafficking, and the exploitation of foreign workers by large corporations, this title is sure to spark a great deal of discussion and debate. Because violence is addressed in such an uncomfortable and unflinching manner, this title might be better suited for older, more mature readers. Pair this title with Linda Barrett Osborne’s This Land is Our Land for a unit on immigration or with Patricia McCormick’s Sold for a unit on human trafficking. 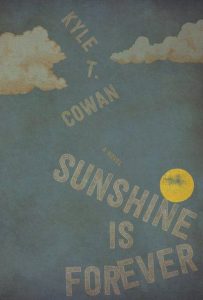 Hunter S. Thompson spends his days smoking pot with his only friend until a tragic “incident” changes everything. Desperate for acceptance and connection and wracked with guilt, he blames anyone else for the events in his past.  When he makes a couple of suicide attempts, he is sent to Camp Sunshine for depressed teens.  After being in therapy for months and on several medications, Hunter is not optimistic about the Camp Sunshine Program.  A few of the counselors and guards on staff are cruel and clueless,  though one or two seem genuinely interested and concerned for the kids.  But Hunter finds a real friend in his bunkmate Quint and a potential girlfriend in the charismatic but manipulative Corin. These connections and the questions of his therapist are helping Hunter make progress with his mental state, but when Corin convinces Hunter and a few others to join her in an escape plan, all of their chances for recovery are threatened.  THOUGHTS:  Sunshine is Forever is a raw and darkly humorous tale that tackles adolescent depression, suicide and mental health treatment in a believable way. A fast-paced read – a good choice for reluctant readers and for those who appreciate darker realistic fiction titles.   The mature themes and make it more appropriate for older teens.
Realistic Fiction            Nancy Summers, Abington School District