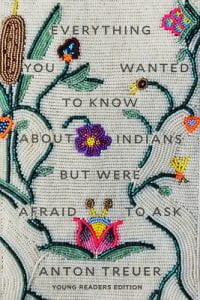 A Native Ojibwe professor of Ojibwe language and culture at the University of Bemidji in northern Minnesota, Anton Treuer has compiled a thorough exploration of Native American history, past and present. Formatted as questions and answers, Dr. Treuer separates the material in essays on the following topics: terminology; history; religion, culture, identity; powwow; tribal languages; politics; economics; education; social activism; perspectives. Among the subjects discussed are how to refer to Native Americans (which term to use), explanation of different customs and ceremonies, justification for reservations, criticism of imposed governmental removals and Indian schools, gender identity, women’s roles, and marriage in Native American community, identification of Native inventions and discoveries, and discussion of incidents connected to Native Americans. The information, albeit short, is noteworthy because of the wide variety covered. Students can use the detailed index to research Native American life; all ages can benefit from educating themselves on the Indigenous people whose home colonizers disrupted. Dr. Treuer writes in a relatable style, often posing his own carefully crafted opinions on some sensitive subjects and providing a personal touch to otherwise expository writing. This guidebook adapted for young readers is an essential purchase for school libraries. In addition to the index, the book includes photographs, recommended readings, and notes.

THOUGHTS: Each section of this book begins with quote(s), and I was surprised to see under the History heading one by Adolph Hitler. Rest assured, Treuer is reinforcing the devastation of Native American history, compared with Hitler’s annihilation of people. Treuer’s father, Robert Treuer, was an Austrian-Jew who escaped the Holocaust because of his mother’s efforts in securing transport to England and then, America. Dr. Treuer is steeped in his own mother’s Ojibwe heritage, and his non-Native father was also an advocate for Native American rights. Easy to use as a reference tool or for cover-to-cover reading, Everything You Wanted to Know About Indians But Were Afraid to Ask, fulfills a need in everyone’s school collection and supports the continuing Diversity, Equity, and Inclusion work.