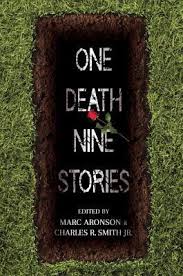 One Death Nine Stories is just that.  Nine different stories narrated by nine different characters written by nine different authors all telling about one death, the death of Kevin Nicholas, a 19-year-old charismatic cross country super star.  Each character finds himself or herself connected to Kevin in one way or another.  From the funeral worker to Kev’s ex-girlfriend to a stranger in Texas, all are left to deal with Kevin’s sudden death.  With each narrator, readers gain an understanding of who Kevin was and the demons that haunted him.  This is a great companion for readers who loved 13 Reasons Why and/or  If I Stay.  This can also be used as a supplement to a literature course or used by guidance departments.