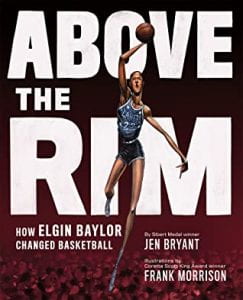 “Whenever Elgin played, people stopped what they were doing and watched.” Elgin Baylor had that kind of effect on the game of basketball, but that was not all. As he grew and played, he also learned and watched what was happening in the world around him. He saw civil rights leaders bravely and peacefully standing up (or sitting down) for change. When Elgin finally made the NBA, he was still facing many forms of discrimination, and now it was his turn to act. “Sometimes you have to sit down to stand up.” The lessons from this poetic biographical picture book by the stellar Jen Bryant are sure to land with young sports fans; meanwhile, the stretched artistic oil paintings portray a man that seemed larger than life in an ever changing time. Just watch and see the impact this book could have on your young readers!

THOUGHTS: Elgin Baylor may not be a household name for young fans, but if they stop and discuss it, they will see how the work of LeBron James, Jackie Robinson, and others are intertwined with his leadership and talent. The timeline at the end offers its own intertwined path between civil rights events and Elgin’s career. A very worthy addition to picture book biographies. 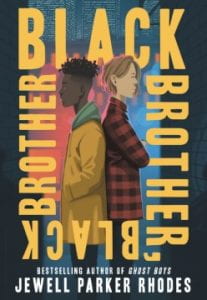 Donte Ellison attends Middlefield Prep and when the book opens, Donte is getting in trouble for something he did not do. Donte is biracial (with one Black parent and one white parent), and he has a brother who is much lighter skinned compared to Donte. Trey has not had nearly as much trouble as Donte has, in dealing with classmates and teachers. Donte decides he wants to learn how to fence, so he can confront one of the bullies, the school’s fencing team captain.

THOUGHTS: This book weaves beautiful storytelling with lessons about racial justice as well as a commentary on the school to prison track that many young Black students face. A must own for every upper elementary through high school collection. 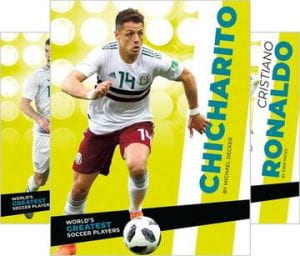 This reviewer read Harry Kane in the World’s Greatest Soccer Players series.  This series highlights some of the greatest current players in the world’s most popular game.  Each book in the series tells the story of each player from their childhood through their professional career.  Includes many colorful photos, side bars with even more player information, a glossary, and an index.  Reinforced Library Bound covers.

THOUGHTS: Great addition for a library looking to update their sports biography section with current athletes. 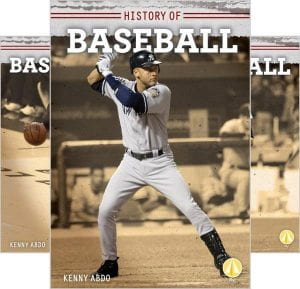 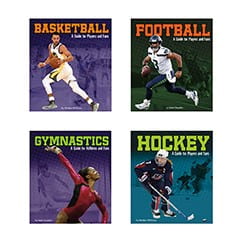 
Girls’ Lacrosse: A Guide for Players and Fans is an immersive resource filled with a wide variety of lacrosse information, specifically for girls who would want to play this sport. This book contains the history, rules, gear required, strategies, and even additional information on this subject. While there is crossover between boys and girls in this sport in terms of rules and regulations, this book specifically discusses rules and information meant for females who would play this sport. This book is a great resource for those who are interested in learning more about lacrosse!

THOUGHTS: I appreciate the great detail, photographs, captions, and glossary items found within this book. It is very visual and appealing, all the while providing information. This book was well written in discussing how the rules vary between male and female lacrosse, informing the reader that there are many similarities, but there are some differences. A great read for anyone, male or female, who may be interested in this sport. 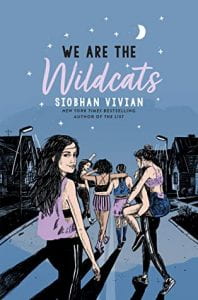 This reviewer read Harry Kane in the World’s Greatest Soccer Players series. This series highlights some of the greatest current players in the world’s most popular game. Each book in the series tells the story of a player from their childhood through their professional career. Books include many colorful photos, side bars with even more player information, a glossary, and an index. Reinforced Library Bound covers.

THOUGHTS: This series is a great addition for a library looking to update their sports biography section with current athletes. (Title Reviewed: Harry Kane) 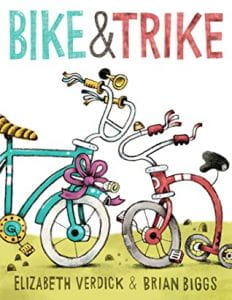 Switching to a “big kid bike” is a rite of passage for children, but what about the emotions that the vehicles go through?? Bike is new and shiny and ready to roll, while still having lots to learn. Trike is trusty and experienced, though a bit beat up and too small. When the two first meet in anthropomorphic fashion, they go through some initial reactions. Then a race challenge brings out further emotions, and eventually a Bike & Trike find mutual respect and come to a satisfying conclusion. Verdick and Biggs have hit on an emotional ride that will have reader’s ready to hop on and enjoy!

THOUGHTS: As a social emotional discussion book, there is plenty to unpack here. However, it is just as useful as an entertaining read for bike lovers. Perhaps my favorite extension would be a writing lesson to imagine what stories the rest of the things in any child’s garage (or basement or closet…) might tell if they could share and grow like Bike & Trike. 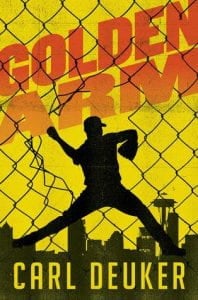 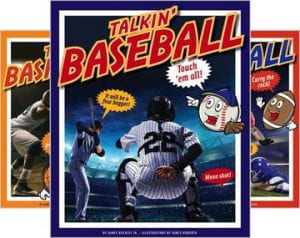 “Play sports? Watch sports? Talk sports!” That’s the tagline for this series highlighting special sports terms, insider phrases, comical or descriptive terms, and player nicknames. Fans of these sports will want to check up on their lingo–historical and modern-day–and add some understanding to their use of it as they go. They may even think of plenty more to add to the mix. For example, “The slugger ripped a frozen rope into the gap and pulled up with a two-bagger.” Baseball translation: “A powerful hitter smashed a line drive (further defined) between two outfielders (further defined) & ran to second base.” These books will cause laughter, and comments such as, “that’s right” or “I didn’t know that was why…” as fans feel a bit more at home watching, playing, and talking sports. For the uninitiated, these books can solidify the lingo.