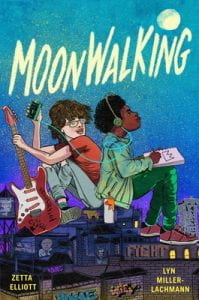 The title of the verse novel, Moonwalking, refers not so much to Michael Jackson’s signature dance move, but to a certain time period–the 1980’s–when punk rock was popular, Ronald Reagan was president, the infamous air traffic controller strike raged, and Brooklyn neighborhoods were largely broken and poor. Two eighth-grade characters inhabit this book: John Joseph (JP) Pandowski whose family has to give up their house on Long Island because his father loses his job as one of those ill-fated air traffic controllers; and they move in with his Polish grandmother in a basement apartment in Greenpoint. Biracial Pie feels acutely the abandonment of his African father and the need to protect his mentally fragile Puerto Rican mother. The pair cannot be more different. JP is shy and has difficulty making friends; Pie knows the ins and outs of his neighborhood and is a creative tagger. Still, they share classes together and JP is drawn to the more confident Pie. One thing they have in common is the arts. JP yearns to learn how to play the guitar his father’s friend gave him. The kindly school art teacher takes Pie under her wing and exposes him to the art of Jean Michel Basquiat and encourages Pie to enter an art contest. Though JP lacks the words to forge a friendship with Pie, the latter shares a night of tagging with him and accepts him. While Pie is parentified and JP is ignored by their respective families, the boys are drawn to each other by their personal troubles and their artistic endeavors. The joint authors spare no words to describe the harsh and unfair rules of Reagan’s actions and include episodes that smack of blatant racism: the unfairness and harsh treatment Pie experiences at school and at the hands of the police. The conclusion of the novel is not tidy, but it is satisfactory giving a realistic view of boyhoods that come up short because of unfortunate family situations. The authors experiment with different types of poetry throughout, alternating between the two boys, making this novel a quick and compelling read for students who may opt for more believable tales.

THOUGHTS: Several threads run throughout this verse novel with some sections scripted almost like prose; some in shapes. First, the home lives of both boys is dismal but realistic and perhaps relatable to some readers. Frustrated and angry, JP’s father is verbally abusive to his son. Pie’s mother is mentally fragile. Second, the explanation of Reagan’s response contrasted with Lech Walesa’s leadership in the Solidarity movement reveals a period in history not known to many students. Last, the strong parallel of Pie’s life with the artist Jean-Michel Basquiat can be discussed and coupled with the picture book, Radiant Child by Javaka Steptoe. Two incidentals: JP surprises his sister kissing her friend, Claire, but otherwise there are no other LBGTQ+ elements. The dust jacket states that JP is autistic, but this characterization is not distinct throughout the story.