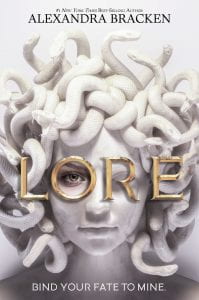 Lore Perseus is trying to live a normal life, but as a descendant of the Greek hero Perseus, it’s not that simple. Every seven years, a new Agon begins. During this time, nine Greek gods walk the Earth as mortals as a punishment from Zeus. These gods are hunted by the descendants of the ancient Greek bloodlines. If a god is killed by a mortal during an Agon, the mortal hunters will inherit their power and immortality. Although Lore walked away from that world after her family was murdered, her past is catching up with her. When she is approached by a childhood friend and the god Athena, Lore strikes up an alliance hoping to avenge the death of her family and finally escape the Agon forever. Set against the backdrop of modern day New York City, Lore must confront her past, figure out who she can trust, and ultimately save the world from both old gods and new.

THOUGHTS: This book has been described as a mix between The Hunger Games and Percy Jackson and the Olympians, and I would absolutely recommend it to readers that are fans of Rick Riordan and Greek mythology. In addition, Lore is a standalone fantasy novel which may appeal to readers who are not looking to commit to a series. The main character, Lore, is a strong and powerful female determined to take control of her own life. The fast-paced story is full of action, and the surprising plot twists will keep readers on their toes!

Lore Perseous wants to be a normal teenage girl living in New York City. She wants to forget that she is from an Ancient Greek bloodline, descended from Perseus himself. However, the brutal reminder of who she is becomes apparent as the Agon begins its next cycle after seven years. The Agon, which started as a punishment from Zeus for past rebellions, is a time in which nine Greek gods and goddesses are forced to walk on Earth as mortals. During the seven days of the Agon, if a god or goddess is killed by a descendant of an ancient bloodline, the descendant seizes that god’s powers and immortality. For her own sanity and protection, Lore is determined to ignore the Agon as she has horrible memories of what happened to her family during the last one. The Fates have other plans for her when two people seek her out: Castor, a childhood friend, and Athena, the goddess of wisdom and war. Athena offers Lore an alliance in an attempt to stop one god from becoming all-powerful. Joining this alliance means she could possibly end the horrors of the Agon forever, so Lore is tempted. She knows, however, binding to Athena could come at a deadly cost and wipe out the rest of the Perseous bloodline forever. By rejoining the hunt, Lore is leaving her fate in the hands of a powerful goddess who is not always known for keeping her promises.

THOUGHTS: Alexandra Bracken’s book is a heart-pounding adventure that leaves the reader at a cliffhanger with the end of every chapter. Readers should have a basic knowledge of Greek Mythology to get the most out of this book, but fans of Zeus and all the rest are sure to love this tale. This book is a fantastic purchase for high school libraries, especially with students who read Percy Jackson in middle school and are now looking for something more advanced. 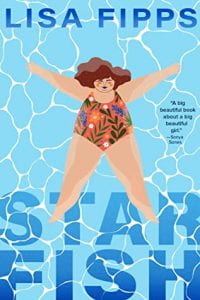 Starfish follows the story of Ellie, who has been bullied her whole life for her weight. In order to deal with these issues, she creates “Fat Girl Rules” to live by; however, the reader can tell that these “rules” aren’t working for her. Ellie’s favorite thing is to swim and she can forget about her weight issues and take up all the space that she wants. This novel is told in verse, which really adds to the overall plot, and I feel makes this a more impactful book versus if it were told in regular novel form.

THOUGHTS: I loved Ellie and her journey throughout this book, and it felt so authentic to me. The only part that frustrated me was her mom; however, I can also imagine there are parents out there who are like that with their children who struggle with weight issues so I kept that in mind while reading.

Ellie’s nickname Splash has been with her since she was five years old. She did a cannonball into the pool in her whale-print bathing suit, and Splash was born. Now she is in middle school, and her classmates constantly tease her about her weight. Even worse, so does her family: her brother is downright mean, her sister never sticks up for her, and her mother is constantly putting her on crazy diets and weighing her at the start of every week. Her only allies are her father and her new best friend Catalina, whose family only see how wonderful Ellie really is. Ellie doesn’t understand why no one else can see what they see, especially her own family. She tries to take up less space living by the Fat Girl Rules she creates, especially one that states you don’t deserve to be seen or heard or noticed. She lives by these rules everywhere except the pool; the pool is one place where she can be weightless in a world that is obsessed with body image. With help from Catalina, her dad, and her new therapist, Ellie embarks on the difficult journey of learning to love herself despite what others think.

THOUGHTS: This middle grade novel is equal parts heart-wrenching and heart-warming. Written in verse, Lisa Fipps’ beautiful writing will resonate with anyone who has ever had body image issues or struggled to love themselves. Starfish is a must-have for middle grade libraries.