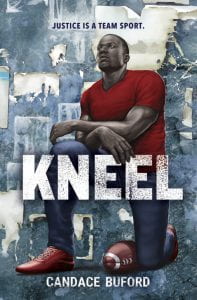 Kneel follows Russell who is a talented football player from a small town looking for a full ride scholarship to escape. However, Russell’s teammate and best friend, Marion is unfairly arrested and then benched for the rest of the season, Russell decides to take a stand.  In doing so, Russell sets off a chain of events that he never saw coming and refuses to back down from. In the end, will Russell be able to enact the social change that his community desperately needs, or will he have to pick between social justice and football?

THOUGHTS: This was amazingly written, and felt extremely realistic. I enjoyed that each character felt unique to me, in how they dealt with racism as well as how they interacted with each other. This wasn’t too technical with football, which I appreciated as someone who isn’t familiar with football.  I would highly recommend this for a high school collection, and feel this would also make a great book to teach in a high school literature class.

When practice runs late, Russell and Marion know that breaking down on the parish line between Monroe (their side of town) and Westmond (the wealthier side of town) is not the best spot to be. A few weeks ago the untimely death of teen Dante Maynard, who was killed by a white police officer for “looking suspicious,” rocked the local black community. The fact that Russell’s car could draw unwanted attention for its condition doesn’t add to his limited options as darkness approaches. Instead of the cops, though, Bradley Simmons, a varsity football player from Westmond, pulls up in a shiny BMW, and he taunts Russell and Marion about last year’s playoff whipping which ended with Marion being seriously injured and jeopardizing his football future. The pent up frustration doesn’t end, and animosity explodes when Monroe meets Westmond at center field for the coin toss. Unfair, one-sided refereeing leaves Russell injured. To make matters even worse, the cop that killed Dante Maynard is on game security, and he takes Marion off the field in cuffs. Though Russell promises Marion he’ll “handle this,” the deck is stacked against the boys, their team, and their community. Due to his pending charges, Marion is benched and barred from the team until his situation is resolved. In an instant, his only way out disappears. Russell realizes the only way to take a stand is to take a knee, and the repercussions of his action are more than he imagined. If the only way out of his situation is through a Division I football scholarship, what lengths will Russell go to in order to earn his spot, and will he have to give up his beliefs to make it happen?

THOUGHTS: Timely and thoughtful, Kneel transports readers right into the racial tensions. Readers will feel for Russell and be angered by the actions and the lack of action from local authorities. A must have for high school collections, this title also would pair well with classics and other contemporary titles dealing with similar topics. 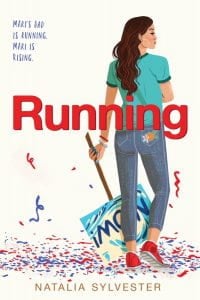