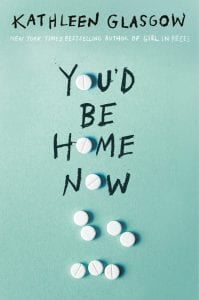 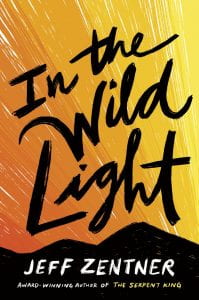 Set in a small Tennessee town, two misfits from troubled families develop a strong bond after meeting at a Narateen meeting. Cash is struggling to come to terms with his mother’s death, the knowledge that his beloved grandfather is dying, and his fear that he has no special gift to offer anyone. Delaney is a brilliant, self-taught scientist who discovers a bacteria-destroying mold with potential medicinal benefits.  Because of this discovery, she is offered a full ride scholarship to an elite New England prep school and secures a spot for Cash as well.  Delaney is determined to start anew and pushes Cash to join her, though he believes he is not deserving of this opportunity and fears missing precious time with his grandfather. They both struggle to adjust to their new life so far removed from their roots but are fortunate to find a friendship with two other new students at Middleford Academy and to nurture their own interests and passions and the special bond between them.

THOUGHTS: A thoughtful, coming of age story with a strong focus on the value of friendship and family, with charming characters, beautiful descriptions, and some gorgeous poetry. Touching, emotional, and heartfelt, this book will be appreciated by fans of All the Bright Places and Looking for Alaska. 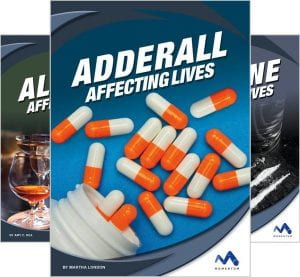 This Hi-Lo series is intended for grades 3-6, and would work for middle and high school collections. Each book opens with a two-page Fast Facts about the drugs, defining them, stating how they are used, and the physical and mental effects. Four chapters each begin with a personal story of a person who used the drug, or a family member. These will draw in readers who will be introduced to or can relate to the scenarios and emotions involved. Posed stock photos help to show appropriate situations, such as worried family members or helpful medical staff. Each personal story shares the beginning of the drug use to the complications and follows through to help received through social workers, counselors, and rehabilitation. These positive outcomes communicate hope even in difficult situations. Each book closes with questions to think about, glossary, extra resources, and an index. Online resources via a ChildsWorld.com/links lead to kidshealth.org and drugabuse.gov, suitable for older children and teens. Titles seen for this review: Tranquilizers and Depressants and Prescription Opioids.

THOUGHTS: Well-done resources suitable for helping younger students to understand the dangers of addictions and options for recovery.

Drug use, especially prescription drug use, opioids, and e-cigarettes, is prevalent in society. This set of twelve books brings awareness of the effects different addictive substances can have on a person. This reviewer had the opportunity to read Adderall: Affecting Lives. Each of the four chapters is written as a personal story and through each story, the reader learns about how adderall can affect lives in both positive and negative ways and how to get help in case of addiction. This book features bold words that are defined in the back, headings, fast facts, and back matter that includes resources for further exploration on the topic. The chapters are written in language that is easy to understand yet appropriate for a young audience.

THOUGHTS: The titles in this collection would be a good purchase for an upper elementary library or a middle grade library that includes grades five and six. 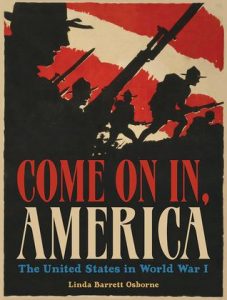 Osborne, Linda Barrett. Come On In, America: The United States in World War I. Abrams, 2017. 978-1-4197-2378-0. $17.95. 170p. Gr. 6-12.
Published to coincide with the 100th anniversary of the United States entering World War I, Come On In, America explores not only the history of World War I, but also the war’s impact on the American homefront. An overview of events leading up to America’s involvement of the war is presented, as well as an examination of U.S. entry and participation in the war. Chapters explore issues weaponry, the war on the homefront, and African Americans and women and their role in the war. Also discussed are topics such as war propaganda, the treatment of immigrants in the U.S. during the war, conscious objectors, and more. The book closes with chapters outlining the end of the war and the legacy of World War I. The text incorporates numerous primary source accounts as well as photographs, posters, and other images. THOUGHTS: While slim (only 170 pages), this title manages to convey an excellent overview of World War I, and is appropriate for both the casual reader as well as the researcher. The first-person accounts and numerous photographs present throughout the text bring the time period to life. Highly recommended for secondary libraries.
940.373, World War I      Elizabeth Henry, Lampeter-Strasburg SD 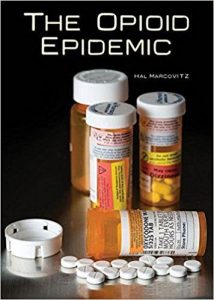 Marcovitz, Hal. The Opioid Epidemic. Reference Point, 2018. 978-1-68282-299-9. $29.95. 80p. Gr. 6-12.
As the opioid crisis continues to sweep the nation, the need has arisen for additional informational resources on this topic for student readers and researchers. The Opioid Epidemic aims to help meet this need. In this slim, yet informative volume, author Hal Marcovitz explores the history of opioids and their use in treating pain and injury, types of opioids, and their effects on the human body. Also presented are the social and emotional effects of opioid addiction on opioid users, their friends, family and society at large. Addiction treatment options are also discussed. Present throughout the text are first hand accounts from addicts, family members and medical professionals. Numerous statistics illustrate the growing addiction crisis across the United States. THOUGHTS: This book offers a solid overview of the opioid epidemic, written in a manner that will be easy for students to understand. A good choice for student researchers or debaters. Recommended.
362.29, Substance Abuse     Elizabeth Henry, Lampeter-Strasburg SD 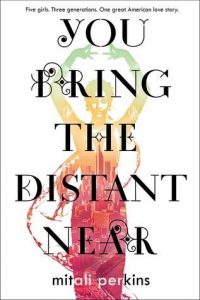 Told through the alternating voices of the Das sisters and their daughters, You Bring the Distant Near is the story of three generations of women in a Bengali family, who immigrated to the United States. The bond between Sonia and Tara Das is explored as they each struggle to find their own place in America, all while obeying the cultural traditions of their family. Supportive and united, each sister takes a separate path in life, which leads Tara to success as a film star back home in India and Sonia into a full embrace of an inclusive American culture and a happy interracial marriage in New York.  Their daughters, Chantal and Anna, in turn have very different upbringings, but all the threads of this family’s disparate experiences come together when Anna is sent back to the US to finish high school.  Beautifully written with well-drawn and complex characters, the novel realistically portrays the nuanced relationships between the women.  The rich Bengali culture weaves through the three generations, influencing each of the women in different ways.  Thoughts: Strongly recommended as an addition to your collection of novels on the immigrant experience, filled with positive messages about acceptance, integration, and identity.

We hear the stories of five Bengali- American women in three different generations, spanning from the era of mini-skirts until just after the tragedy of 9/11.  Perkins weaves their stories together beautifully.  All of them question what it means to be Bengali or what it means to be American and each comes up with their own answers for themselves.  Some of the stories are heart-breaking, but most are easy to empathize with.  A family tree at the beginning is a good key, but because it is there, the long-term romances are easy to foretell if they will end in marriage.  THOUGHTS   This is a great book that will bring a diversity of characters to your library.  It is also a beautifully told story. 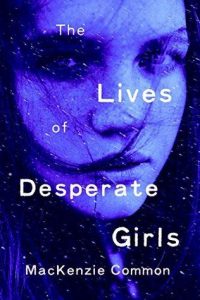 Tragedy befalls two girls in rural Northern Ontario, but the reaction of the police and the public is different in each case.  When pretty and wealthy Chloe Shaughnessy goes missing the police investigate in earnest, and the townspeople hold vigils for her safe return. A few days after her disappearance,  the body of  Helen Commanda, a girl from the reservation, is found in the woods. There is no public outcry about this crime, and when the police find no obvious clues, her case is placed on the backburner.   Chloe’s best friend Jenny, now friendless and depressed, becomes obsessed with Helen’s murder and the entrenched racism against the natives in their town. Jenny takes up with the high school bad boy, and together they set out to discover what really happened on the night Helen died. But as the police continue to focus on Chloe’s disappearance, Jenny is equally determined to protect Chloe’s secrets. Thoughts: The novel broaches some serious issues including date rape, racism, and substance abuse, but the character and plot development fall a little short.  A secondary choice for older teens who appreciate realistic fiction with a hard edge.