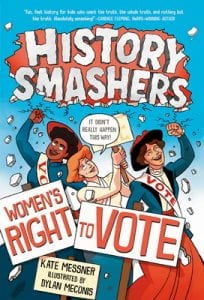 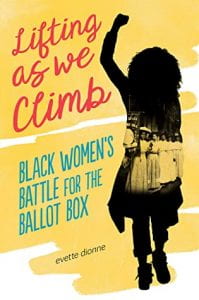 Evette Dionne’s Lifting As We Climb: Black Women’s Battle for the Ballot Box is a historical account of the struggle for the right to vote. Covering the lesser-learned about but powerful figures in history, the book provides a comprehensive look at the path it took to get where we are today. Activists Sojourner Truth, Ida B. Wells-Barnett, Mary Church Terrell, Fannie Barrier Williams, and Alice Paul (among many others) played key roles in the fight to vote but are frequently left out from the history books. Their arduous battle to earn the right to vote was fraught with struggles and setbacks from still on-going voter suppression to lynchings and voter intimidation. While suffragettes succeeded and the nineteenth amendment was ultimately ratified, voting rights are still jeopardized by unfair practices making this an extremely timely and relevant look at the way our country has and continues to function.

THOUGHTS: A succinct yet complete account, Lifting As We Climb highlights many lesser known figures in the fight for voting equality making this a key piece for any collection. 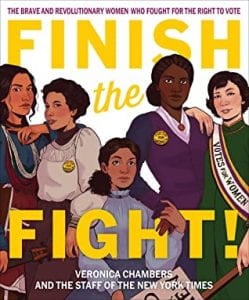 Finish the Fight! is not your momma’s suffrage book! Preceding the introduction, eight playing card style portraits feature commonly known suffragists such as Lucy Stone, Susan B. Anthony, Alice Paul, and Elizabeth Cady Stanton neatly arranged into a two page spread. The page turn reveals a single sentence: “We wanted to tell more of the story” surrounded by numerous, overlapping diverse suffragette playing cards featuring previously unsung heroines and disrupting  the notion of suffrage as a stagnant piece of history. The playing cards speak volumes with bright colors, confident poses, and knowing smiles emphasizing each woman as a force to be reckoned with in her own right. Over 117 years of the Women’s Rights movement are covered beginning with the 1848 Seneca Falls convention, beyond ratification of the 19th amendment in 1920, and through the Equal Rights Voting Act of 1965. Brief chapters filled with accessible text for an elementary to middle grade audience introduce young readers to marginalized aspects of the suffrage movement. Readers will learn about the influence of Native American women including leaders of Haudenosaunee, Omaha, and Dakota-Sioux cultures. Another chapter explains how Juno Frankie Pierce encouraged 2,500 Black women to register for the vote allowing suffragists the numbers they needed to secure ratification of the 19th Amendment in Tennessee. One chapter is dedicated to the nearly disastrous effects of bias within the movement while another focuses specifically on queer leaders and their fight for equality. Primary source documents including posters, photographs, historical documents, and memorabilia are digitally enhanced and positioned throughout the pages with captions. Everything about this book is visually stunning. Portraiture credit is given to eleven artists whose unique styles pay homage to each highlighted woman in preface to her chapter, stunningly capturing her style, time period, and personality. Jovita Idar,  Mexican American journalist/activist and League of Mexican woman founder, is surrounded with southwestern flora and the scales of justice. Mabel Ping-Hua Lee, a sixteen year old Chinese immigrant known for leading one of the biggest suffrage parades in New York history is depicted wearing a sash seated atop a white horse against a backdrop reminiscent of mid-Manhattan’s “Chinatown” neighborhood. Women with a chapter featuring her contribution to the fight include: Francis Ellen Watkins Harper, Josephine St. Pierre Ruffin, Elizabeth Piper Ensley, Mary Church Terrell, Angelina Weld Grimke, Mary Burrill, Ida Wells-Burnett, Susette La Flesche Tibbles, and Zitkala-Sa. Dozens of others are mentioned throughout the text. The trading cards appear again in the backmatter along with succinct biographies of each featured lady.

THOUGHTS: This book is a celebration of the unsung heroines of the suffrage movement, just in time for the 100th anniversary of the ratification of the 19th Amendment. Finish the Fight! is quite possibly the most comprehensive, approachable, inclusive look at the radical fight to secure votes for women. Women’s history is inextricably tangled up with equality and human rights on all fronts. Rarely are the stories of those who worked in parallel to obtain rights for BIPOC and LGBTQ folx woven into history books for children. This book is a much needed addition to any elementary or middle grade library collection. Primary source material mixed with modern art and plain text opens the door to use this book in a myriad of ways for research, history, and social studies lessons.

Rather than recap stories about the famous white women who fought for women’s rights, this book tells the stories of the African American, Native American, Asian American, and queer women who have made significant contributions but are not as well known as Susan B. Anthony and Elizabeth Cady Stanton. The book explores the history of the women’s suffrage movement including the Declaration of Sentiments, the representative democracy practiced by some Native Americans which gave women power to make choices, and how women helped states ratify the Nineteenth Amendment to ensure it became part of the US. Constitution. The activists featured include Dr. Mary Walker who is the only woman in US history to be awarded the Medal of Honor and Josephine St. Pierre Ruffin who started the first newspaper by and for black women in the US. Readers will be introduced to Angelina Weld Grimke, Mary Burrill, and other women who were part of the LGBTQ community and fought for women’s rights.

THOUGHTS: Readers will be pleasantly surprised by this book, especially those who have preconceived notions about the women’s suffrage movement or those who think it is boring. Give this book as a gift to a history teacher or encourage a history lover to read and learn about the revolutionary acts of women over one hundred years ago. Middle school and high school students will be inspired by many of the women featured in this book and will have a more comprehensive understanding of the women’s suffrage movement.