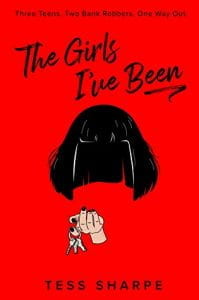 Two armed men enter a bank in a sleepy rural California town assuming they’ll find the bank manager and easily coerce him into taking them to their target – a safe deposit box. The manager hasn’t arrived yet though, and who they DO find is teenager Nora O’Malley. She’s not just any teenage girl. She’s not even Nora O’Malley – depending on how you look at it. Nora spent most of her life playing the roles of different girls with her con-artist mother until her half-sister extracted her from the situation four years ago. As she tries to adjust to a “normal” life and put her past behind her, her biggest problem has been the current awkwardness between her and her ex-boyfriend but now best friend Wes because she’d been lying to him about her new relationship with their other friend, Iris. Thrust into a serious hostage situation with her friends, Nora is forced to resurrect her old identities if she wants any chance of getting them out of this alive.

THOUGHTS: A wild page-turner for fans of the thriller genre. The well-crafted plot alternates from Nora’s past to the present, and it all ties together in the end. It also tackles domestic abuse from multiple angles as all of the three teenage main characters have struggled with it in some form.