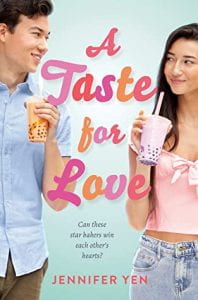 Liza is a free-spirited, Taiwanese-American teen who likes to rebel against her mother’s wishes. With a “perfect” older sister off following her dreams and a meddling mother always on Liza’s case, she doesn’t have to try too hard to go against her mother’s wishes. And dating unsuitable boys has been number one on Liza’s list. Mrs. Yang, co-owner of the Yin and Yang restaurant and bakery with her chef husband, has a plan to get Liza on the right path. Using Liza’s love of and skill for baking, Mrs. Yang convinces her to serve as a guest judge in the bakery’s annual junior competition (think Great British Baking Show). It doesn’t take long for Liza to recognize that she’s been set up by her mother. Not only is each contestant male, each also is Asian American. What follows is a fun battle between mother and daughter, as Liza also fights her feelings for one contestant specifically. Mothers might know best, but Liza is her own person, and she won’t give up easily.

THOUGHTS: As a fan of The Great British Baking Show, I adored this sweet romance. Filled with delicious descriptions, readers will be rooting for Liza from the beginning. Pairs well with other YA “food titles” such as A Pho Love Story, The Way You Make Me Feel, and so many others (just google it!). Highly recommended for middle and high school libraries looking to add representation to their romance sections.