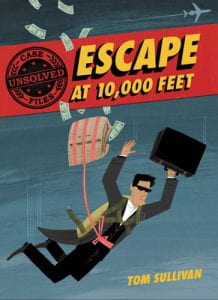 “I have a bomb here and I would like you to sit by me.” Hi-jacker D. B. Cooper committed one of the only unsolved skyjacking in United States history when he boarded the Northwest Orient Airlines flight traveling from Portland, Oregon, to Seattle, Washington, on November 24, 1971. Weak or non-existent airline security gave rise to a rash of plane hi-jackings at the end of the Cold War.  Author Tom Sullivan arranges the story according to six different steps and relates the interesting heist peppered with stylistic drawings and facsimiles of boarding passes and other airline paraphernalia. From our 21st century perspective, Cooper’s seemingly modest demand of $200,000 was readily granted by the head of the airline. His well-planned crime, however, did not go smoothly. He requested parachutes and directed where and how he wanted to escape from the plane; however, when the money arrived, it was in smaller denominations making the parachute backpack heavier than he anticipated. After Cooper stepped out of the plane, no trace of him was uncovered despite a thorough FBI search. In 1980, a family camping along the Columbia River uncovered deteriorating packs of $20 bills. This quick, cleverly illustrated book will interest reluctant readers especially.

THOUGHTS: This fun book has broad appeal. Though the information may not be of high value in terms of curriculum, Escape at 10,000 Feet. . . is a perfect match for students who crave short, easy non-fiction with lots of interesting facts.