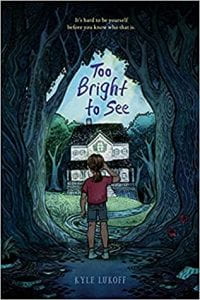 Set in the summer before middle school starts in rural Vermont, Bug and her friend Mo, who now wants to be called Moira, are preparing themselves for the start of something new. Moira takes it upon herself to plan makeovers and make as many new friends as she can before school starts, but all of this makes Bug feel not right. Bug’s uncle, who moved to Vermont with Bug and her mom after her father passed away when Bug was an infant, just passed away leaving them to figure out how to move on. Their old creaky house has always been filled with ghosts, but now the ghost game has stepped up, and Bug is trying to figure out who this ghost is and what it is trying to say! As Bug uncovers the mystery of the ghost and what it is trying to say, Bug makes a huge discovery – he is transgender.

THOUGHTS: This book was scarier than I thought it would be! The ghosts in Bug’s house are pretty aggressive at times, so this would appeal to horror readers. The author is transgender, and you can’t help but think that this authentic story may be semi-autobiographical. Bug’s friends’ acceptance of his identity gives you faith that kids are way more accepting than adults in these matters. 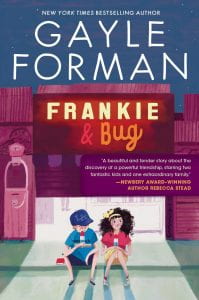 Tired of experiencing life in 2021? Jump back to the summer of 1987, before social media, cell phones, and when summer break meant kids had an opportunity to get bored. Bug was all ready to go to the beach every day with her brother, but he was too cool for that now. While she was moping about, her upstairs neighbor informed her that his nephew would be coming to stay for the summer. Though they don’t hit it off at first, Frankie and Bug cover a lot of ground as ten and eleven year olds in Venice Beach. From sleuthing to try uncover the midnight marauder to a lesson or two in self identity, Frankie and Bug discover the importance of being true to yourself and family is who you surround yourself with.

THOUGHTS: A fantastic addition to middle level libraries. It’s a relief to read a story without the burden of current times, but one that still hits a lot of major themes. The story includes LGBTQ+ and Hispanic representation in an age appropriate manner.