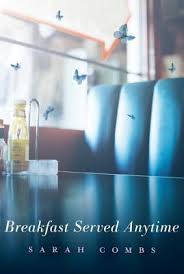 This is a sweet, simple coming-of-age tale that will interest readers preparing for the leap from high school to college. Gloria has always believed that she and her best friend, Carol, would go to New York City after they graduated to make it in the big city, far away from their native and unglamourous hometown in Kentucky. That is, until Gloria is accepted to attend Geek Camp, thus assuring herself a full-ride to the University of Kentucky. Assuring Carol that she won’t consider accepting the scholarship, Gloria plans to go to Geek Camp and picks the major “Secrets of the Written Word,” curious about the cryptic title. The professor doesn’t disappoint. In his introductory letter, he requests that students leave all forms of technology at home, and on the first day of classes sends the students on a scavenger hunt. The small group of four students in the class are an eclectic mix of individuals, including one boy that Gloria at first can’t stand but interests her nonetheless. When the professor eventually surfaces, he sees it as his mission to teach the students about life in Kentucky and gives them their task for the summer- to select one novel as the Great American Novel.  The dialogue is witty and engaging, and the relationships between Gloria and her friends are believable as teens trying to navigate the slippery slope between high school and the college world. This is an excellent book to highlight as a summer reading option for those students beginning to look at life beyond their immediate community.

I found this lovely book by doing a general search on Goodreads for new Young Adult novels. It was a nice change from the many books on suicides that have cropped up lately. Gloria is an interesting character, and I enjoyed reading about her transition into adulthood. In the upcoming month I plan on giving a few book talks for summer reading suggestions, and this one will definitely be included on my list that I share with students. Gloria and her relationships with her new roommate, classmates, and professor give her a glimpse into the life of a college student, which is a great opportunity that would benefit many students. Gloria spends a good amount of time reflecting on her own actions and how they affect people,  which is something that I wish more students would do, and I hope that they begin to do as they leave high school. Empathy is one characteristic that is missing in many students, and to see it in action in a book might push them to develop an understanding of how important it is to show to others.