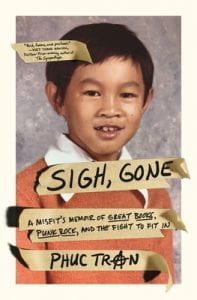 In 1975, during the fall of Saigon, Vietnam, Phuc Tran’s family immigrated to the United States with a two-year old Phuc in tow. They landed in Carlisle, Pennsylvania, where they struggled to assimilate into small town life. Sigh, Gone explores Phuc’s childhood and teenage years. Against the indelible backdrop of the 1980s, he finds comfort and connection in punk rock music, the wisdom of classic books, skateboarding with his friends, and indulging in some minor hooliganism. This memoir describes his journey of self-discovery as well as many experiences of isolation, racism, and even abuse. Although firmly rooted in time and place, Phuc’s quest to develop his own identity (and avoid the timeless pitfall of being a poser) will resonate with today’s teen readers. “I contemplated what exactly was authentic for me, a Vietnamese teenager in small-town PA,” Tran writes. “What part of me was the real me and what was the façade?”

THOUGHTS: Sigh, Gone is an uncommonly good memoir: moving, universal, and profound. Readers will laugh out loud in every chapter, look up Phuc’s many music (and hopefully literature) references online, and also look up a higher-than-average number of new words in the dictionary. 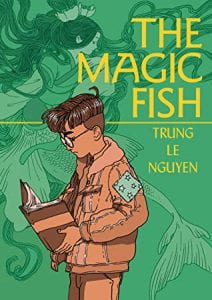 In The Magic Fish, author/illustrator Trung Le Nguyen braids together a family’s immigration story, a son’s desire to reveal a part of his identity to his parents, and retellings of classic fairy tales such as Cinderella and The Little Mermaid. Eighth-grader Tien reads these fairy tales to his mother, whose first language is Vietnamese, to help her improve her English. Mother and son (and father, when he isn’t at work) are close as can be, but still Tien struggles with how to share his secret with them: he is attracted to boys. The problem is part language barrier, part apprehension for how they will react. Tien’s mother, meanwhile, is struggling with the declining health of her own mother in Vietnam, and memories of fleeing her home country many years ago. Nguyen’s truly exquisite artwork is color-coded to orient the reader both in time and within the story; the present is ruby red, the past is mustard yellow, and the fairy tales are various jewel tones. It sounds complicated, but it works beautifully. The fairy tales foreground themes of new beginnings, identity, isolation, and connection, while also casting light on the experiences of our main characters. The gentle twist at the end satisfyingly reminds Tien (and readers!) that true happy endings are the ones we write for ourselves.

THOUGHTS: Readers of The Magic Fish will find themselves equally captivated by each storyline within this many-layered tale.

The Magic Fish introduces readers to Tien who enjoys reading his favorite books from the library, specifically fairy tales.  Tien has a hard time communicating with his parents for multiple reasons, one of which is a language barrier, however he also is finding it hard to put into words what he’s feeling and thinking. Tien finds it especially difficult because he is grappling with his sexual identity and whether or not he might be gay. Trung uses fairy tales in such a beautiful way to deal with hard things for kids, and parents, to talk about, that the book never feels too heavy or weighed down by these big topics. The illustrations are absolutely beautiful and add so much to the story.

THOUGHTS: I’d highly recommend this book for any high school library graphic novel collection. The story feels so relatable, even if you have never had to deal with any of the topics that are woven throughout the book. 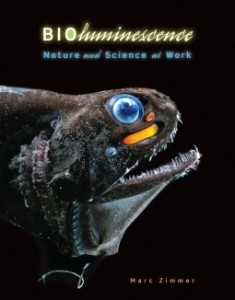 This engaging title begins with an overview of bioluminescence in the animal kingdom, explaining its use as a communication, defense, and survival mechanism for animals, describing experiments that have been done on bioluminescent species, and explaining what we have learned about bioluminescence from these experiments.  Then, the author goes on to describe ways in which bioluminescence is being used in scientific studies.  For example, scientists who require sterile conditions for lab research use bioluminescence to test for the presence of bacteria; if bacteria is present, their lab surface will glow.  Scientists are also using bioluminescent proteins in medical studies to learn more about cancer, HIV, Alzheimer’s disease, malaria, and other viruses and diseases.  Color photographs, diagrams, and sidebars are dispersed throughout the text, and a glossary, source notes, bibliography, reading list, and index are all included.  A concise introduction to a complex topic, the author does an excellent job of presenting highlights about bioluminescence and explaining their applications and importance to the field of science.  THOUGHTS: Although I do not view myself as a science person, this book proved very interesting to me.  Not only were the concepts broken down so they were easy to understand, but there were many tidbits of information throughout the book that were actually very intriguing.  For example, I learned that females of some species of fireflies, unlike their male counterparts, do not have lucibufagin, a poisonous chemical that can be released when challenged by a predator.  To make up for this, they will actually eat a male firefly from a different species in order to take in his lucibufagin and increase their chances of survival. Full of interesting facts like this, this book would be a solid addition to any high school science collection. 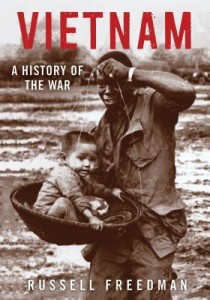 In this concise overview of the Vietnam War, Freedman begins with an examination of Vietnam’s history, presenting its struggles for independence against the Chinese, the French, and the Japanese.  He then goes on to explain how America became involved in Vietnam.  Throughout this explanation, Freedman explores many key figures (such Ho Chi Minh and multiple U.S. presidents) and major events (such as the Gulf of Tonkin incident, the My Lai massacre, the Kent State shootings, and more).  Freedman then concludes with a chapter on the relationship between the U.S. and Vietnam today and presents valuable lessons that were learned from America’s most controversial war.  Black and white period photographs are interspersed throughout the text, and a timeline, source notes, glossary, bibliography and index are included.   THOUGHTS:  Compared to much of the narrative nonfiction on the market these days, this title is very straightforward and even a little dry at times.  However, there have not been many excellent resources published on this topic in recent years, and the fact that this book comes from an author who has written many award-winning titles makes it all the more appealing.  Given that it is concise (yet thorough) and easy to understand, I feel that this would be a solid addition to any middle or high school library collection.

A look back at the disastrous and divisive war America fought in Vietnam, Vietnam describes the turbulent history of the Vietnamese people under the rule of a long list of invaders and reviews the actions which led to the growing military involvement of the United States in Vietnam at the height of the Cold War along with the impact of the protests of the American people against the unpopular war.  The final chapter provides an update on the current positive political situation between the two nations. The book features many of the iconic photos of the war front and the protests at home. Includes chapter notes, timeline, bibliography, and index. THOUGHTS: Well-written and well-researched, a perfect choice for investigation into a turbulent period in American history. The narrative style makes a difficult topic readable for middle grades and older students.