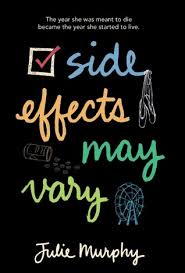 Murphy, Julie. Side Effects May Very. New York: Balzer + Bray, 2014. 978-0-06-224535-9. $17.99. 330p. Gr. 9 and up.
When Alice and her boyfriend sneak home in the middle of the day for a serious make-out session, she is devastated by the scene she witnesses from the window.  Her mother and another man are in the middle of their own romantic tryst.  Almost a year later, just when she believes life may be as close to ordinary as possible, she is diagnosed with leukemia.  In an attempt to come to terms with her own mortality, she decides to finish her bucket list.  At the top would be exacting revenge on her cheating ex-boyfriend and to even the score with her adversary Celeste.  In order to pull this off, she needs to enlist the help of a good friend, Harvey.  Although Harvey has serious reservations, his feelings for Alice and undying devotion allow him to move beyond the guilt and become her accomplice.  Alice is reveling in her small success when another catastrophic complication rears its ugly head – her untimely and shocking remission.  Now she must face the music and repair the damage caused.  Unfortunately, Harvey may no longer be around to help.
The chapters are narrated using a “Then” and “Now” time frame, alternating between Alice and Harvey.  Alice’s brutal honesty and her approach to revenge are candid in her narration.  She has an opportunity to live an autonomous life without the fear of suffering any consequences.  Since the chemotherapy has been unsuccessful, she decides to end the treatment and face her death on her own terms.  What she doesn’t consider is a future without cancer and the side-effect of losing Harvey when she needs him most.