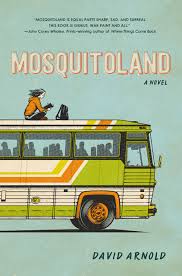 Mary Iris Malone (Mim) is a feisty, outspoken 16 year old who has been forced to leave her home and move to Mississippi with her father and new stepmother.  When she hears that her mother is sick, she steals her stepmother’s secret coffee can of money and buys a Greyhound ticket back to Cleveland.  Mim meets some unforgettable people along the way, including the grandmotherly Arlene, a menacing sexual predator she nicknames “poncho man”, and the devastatingly handsome boy in seat 17C.

Any travel story has its share of twists and turns, and Mim’s tale isn’t any different.  Mim’s bus overturns when a tire blows out, but she and the other surviving passengers soldier on.  “Poncho man” soon attempts to assault Mim in the bathroom of a roadside bus stop, so in Independence, Missouri, she decides to hitchhike the rest of the way to Ohio.  Later, when Mim falls asleep by a highway overpass, she is awakened by Walt, a homeless teenager with Down’s syndrome.  They quickly become traveling companions and mutual protectors.  In a fortunate twist of fate, their paths cross with the boy in seat 17C (whose real name is Beck Van Buren, 3rd year college dropout and photographer).  The three continue northward, not stopping to think about what will happen after Mim reaches Cleveland.  Of course, all journeys do come to an end, and Mim’s ends when her stepmother finds her at the family home in Cleveland.  Mim discovers the truth about her mother’s affliction and is now able to deal with the fact that people and things aren’t always as they seem to be.

Every character in Mosquitoland is memorable, but Mim’s strength, humor, and eccentricity are truly unforgettable.  The book is told from different perspectives; events are described as they happen, but there are also flashbacks to Mim’s time with her family, as well as diary entries addressed to “Isabel”.  Each perspective gives additional insight into the novel’s events.  By the end of the story, Mim has conquered many personal demons and found answers to some important life questions.