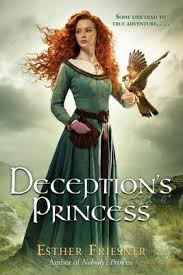 Maeve, Princess of Connacht, is the youngest princess of the High King of Èriu.  She is also the most spirited princess.  From a young age when she took on the prized bull, Dubh, and lived to tell about it, her red-hair wasn’t her only fire.  As Maeve grows, she realizes that she is a warrior, but her father only sees her as the youngest and most prized of his daughters.  Maeve’s adventures defeating wolf-hounds, warding off suitors, and mending the weak force her to grow as an independent young woman, not a prize for her father to award to his favorite warrior or suitor with the most power.  This refusal to accept her place in her father’s palace and her friendship with Odran, the son of Master Ìobar, a highly respected druid, give Maeve the strength in her adventures and the courage to understand her true self.  “If I close my eyes and ears to slander, I’m giving others the power to say who I am.  No one gets to do that […] no one” (Friesner 269).

The newest addition to the Princesses of Myth collection continues to provide young adults with a strong, independent female protagonist based in history (or historical myth to be precise).  Following up her novels of heroines from Greece, Egypt, and Japan, Friesner’s move to Ireland and Maeve provides a more mature look into Irish myth and Iron Age Ireland.  Deception’s Princess reminds me a lot of Disney’s Brave with Maeve and Merida experiencing many of the same emotions as a daughter in a High King’s court and yearning to be independent and speak for themselves instead of always having to do as they are told.  Both characters experience adventure, loss, grief, and awareness of their situations, but the growth in Maeve becomes even more apparent because of her actual growth throughout the novel.  Maeve ages from a toddler into a young adult woman with her spirit and fire only growing as she matures.  Maeve is a flawed, spirited female protagonist who provides strength to those around her and the reader.