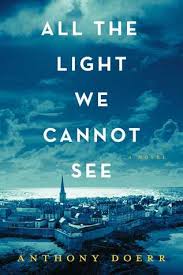 Blind since age six, Marie-Laure is a girl living in Paris with her father, a talented woodworker and locksmith for a museum. Werner Pfennig is a young orphan raised in an orphanage outside Essen, Germany, who has a talent for fixing radio transmitters and receivers. The story is told in alternating voices of the two children as they grow into young adults during the start of World War II. Marie-Laure and her father flee to Saint Malo to escape Paris before the German’s invade. They go to live with her father’s Uncle Etienne in his house by the sea. Her father has made her quite capable by building her a small replica of Paris, and later Saint Malo, then challenging her to find her way home from different places. This game they play, he knows will one day help her. Werner was a very bright child and he was tested for a technical school to which he was accepted. He then went on to help seek out illegal radio transmissions and destroy the threats. Marie-Laure’s father is hiding a “cursed” sapphire that the Nazi’s know about, and they send the gemologist, Von Rumpel to go find it, which leads to an interesting twist. Marie-Laure’s Uncle Etienne came back from World War I and never left the house again. The building resistance against Nazi Germany forces him back to life. He knows he must do something, so he and Marie-Laure broadcast numbers on their huge radio transmitter that they get from the baker in loaves of bread. The lives of Marie-Laure and Werner were always meant to intersect; it is the poignant ending that leaves you both devastated and elated at the same time.

As with any World War II novel, this could easily be used with an AP European History class to highlight German tactical thinking or the European response to the onslaught of the Nazis. This is one of the best novels I have ever read about World War II; mature YA readers will really enjoy it.