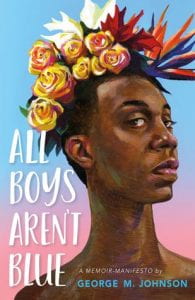 George Matthew Johnson’s first memory is having his teeth kicked out by a white boy, seemingly for no reason other than his race. His first identity crisis happens in elementary school when he learns that his first name was actually George, not Matthew. From that point on, the author struggles with his identity and how he fits into a world that did not accept Black people or queer people and definitely not a young boy who was both. Johnson realizes at a young age that boys are supposed to be masculine, which means being tough, playing football, and conforming to these ideas without question. But he prefers to jump Double Dutch with the girls and wear cowboy boots to Disneyland. For his own mental and physical survival, he learns to code-switch in elementary school – he can impress the boys with his athletic ability when necessary but also gossip with the girls. While Johnson has a fantastic support system in his family, he knows that not all Black queer teens do – and so he wrote this book to serve as guidance. Each chapter is entwined with the lessons Johnson learned along the way in the hopes that Black queer teens will not have to figure them out the hard way.

THOUGHTS: This memoir manifesto is incredibly timely in light of current events. Johnson’s experiences in his life have made him extremely insightful about society, and his insights should (and do) make the reader think about what behaviors are expected of boys practically from birth. This memoir is a critically essential book to have in a high school library as it can provide two things: a window in which to see how those who are different struggle to find acceptance and a mirror for teenagers who are struggling under the weight of the labels society forces upon them.