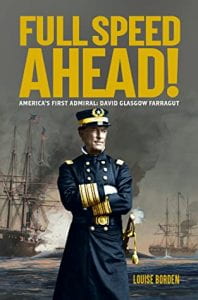 “Full speed ahead!”…it’s probably a phrase that most of us have heard before. Yet many may not know that this phrase became part of American popular culture after it was spoken in a Civil War naval battle by Union Rear Admiral David Farragut. Author Louise Borden chronicles Farragut’s life and career in her biography in verse Full Speed Ahead! Farragut first joined the navy as a midshipman at age nine. He steadily rose through the ranks and distinguished himself on missions around the world, including in the War of 1812, in the Caribbean, around Cape Horn, and in the Atlantic. When the Civil War broke out, Farragut devoted himself to the Union cause. He led the naval fleets that captured the Confederate strongholds of New Orleans and Mobile Bay. After the war, he was promoted once more and became the first ever Admiral in U.S. Naval history. The text is supplemented by numerous photographs, paintings, drawings, letters, and maps.

THOUGHTS: A biography told in verse of a 19th century naval hero might not be the first choice of those browsing the library shelves, so some booktalking may be required for this title. But history buffs who take a chance on the title will be rewarded with an engaging life story of an American hero. An additional purchase for libraries with history fans.