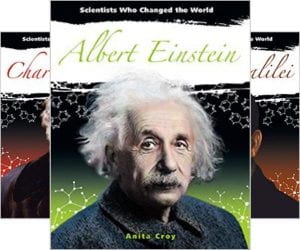 Each of these books is divided into six chapters, covering 1. Biography, 2. Background (of the time period), 3. Breakthrough (scientific discoveries), 4. Key Ideas, 5. Reputation, and 6. Legacy. Croy interweaves the biography and ideas of the scientist well with the time period, making the person’s accomplishments more understandable for their enormity and effect. The design is full of charts, illustrations/photographs and frequent related text boxes, and also frequent white text on black background. Each chapter is set alongside a page printed with a quote or idea from the scientist.  Examples include: “Newton said that gravity explains the motions of the planets, but it does not explain who or what set the planets in motion” (Sir Isaac Newton 33) and “Galileo said that modern discoveries proved that ancient writers did not have superior knowledge. However, if ancient writers could see what modern scientists could see, they would draw the same conclusions” (Galileo Galilei 33).

THOUGHTS: Useful for reports, but thanks to the inviting pages broken into readable segments, this series could also be enjoyed by the casual reader.  It would be nice to see the series expanded in the same fashion.