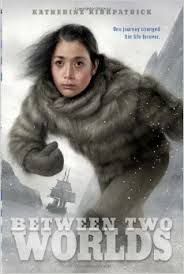 Between Two Worlds is the fictionalized account of a real sixteen-year old Inuit woman, Eqariusaq (also known as Billy Bah) who traveled to the United States with explorer Robert Peary when she was a child.  In this novel, she is back in her native Greenland and married but feels conflicted and doesn’t know where she really belongs.  This book is set during the years of 1900 and 1901, when an American ship arrives with supplies for Admiral Peary.  Peary’s wife and daughter are on the ship and are eager to see him, but he has gone further north to explore.  Eventually, it is decided that the ship should travel north to “Musk Ox Land” to try to find Peary.  It is a given that Billy Bah will be a part of the expedition.  She is an expert in the English and Inuit languages, as well as an accomplished seamstress who will be charged with making native clothing for the Peary family.

The conflict between the Inuit and American cultures is vividly illustrated when Billy Bah’s husband, Angulluk “trades” her to white sailors in exchange for guns and bullets.  This practice was somewhat common, but her fellow Inuit did not approve.  On the expedition to find Admiral Peary, Angulluk trades her to a sailor named Duncan and the two fall in love.  There is never any description of explicit sexual situations, but it is clear that the two become very close over the months that the ship is caught in ice.  During the long winter months, Billy Bah is changed by her experiences.  She does not share Duncan’s dream of going back to America to live, but she also does not feel the same way about her husband.  She realizes that Angulluk will always view her as “property” and wants the chance to determine her own destiny.

This novel is filled with historical detail of everyday Inuit life and culture.  In some ways, this makes the book very interesting. However, it also detracts from the dynamics of the many relationships in the story.  The romantic relationships are not explored in depth, and the complexities of the relationships between whites and the Inuit are largely ignored. Although Peary and his crew depended on the Inuit for survival, their contempt for Inuit culture is clear.  The author of this book also wrote a nonfiction book about Peary’s daughter (Snow Baby: The Arctic Childhood of Admiral Robert E. Peary’s Daring Daughter).  Snow Baby is an excellent book; perhaps Billy Bah’s story would have been better told in a nonfiction format.  Still, Between Two Worlds does address a population that is largely ignored in young adult literature and it deserves an extra look from that standpoint alone.