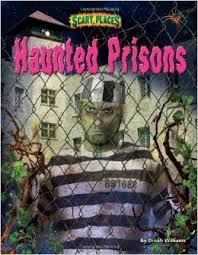 It is easy to see why this series is so popular with kids. This particular book centers on eleven scary prisons around the world and the history and facts behind their ghost stories. A particular favorite is the story of Al Capone who claimed to see the ghosts of murdered rivals. He could be heard screaming in the night and was quite frightened.   All of the stories have just enough information to tell the story without being overly wordy, and the drawings and photographs also add to the overall creepy feel of the book.  Scary Places includes 25 titles.  New titles for 2014 include Abandoned Amusement Parks, Eerie Inns, and Tragic Theaters.  2015 titles include Creepy Islands, A Haunted Capital, Haunted Hollywood, and UFO Crash Sites.  This is a great series for exploration and just plain fun with nonfiction.