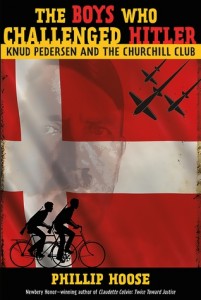 In April 1940, the German army invaded Denmark.  The Danish government, seeking a minimum of control, did not fight back.  Winston Churchill described Denmark as “Hitler’s tame canary” (45).  Many Danish citizens were ashamed, but what could they do?  Fighting back, as the invaded Norwegians were doing, would result in the establishment of a Nazi government and the same horrific executions and city burnings that were happily reported by the Germans.  Fourteen-year-old Knud Pederson of Odense, Denmark, was ashamed of his country and that shame turned to anger.  As he and his friends discussed the changes, they began to scheme about sabotaging the Nazi plans.  If no one else would fight back, they would.  Their “Churchill Club,” named after the honored English leader, was soon born.  The boys twisted or smashed directional signs, then vandalized or torched German vehicles on a daily basis, always leaving their signature: a spray-painted blue mark.  Soon Knud’s family moved far north to Aalsberg, for his father’s work, and he and his brother built a second trusted group to be the Churchill Club.  Members of the Odense group remained in contact, and they encouraged each other, eventually stealing a variety of weapons, and becoming well-known as well as well-hunted.  The boys were caught, interrogated, tried and jailed.  Their determination was not swayed, and they found they had helped to ignite greater Danish opposition.  Emboldened by the teenagers’ actions, Danes nationwide fought back, sabotaged Nazi work, and refused to abide by their government’s compliance.
This remarkable history reads like an adventure tale with danger at every turn.  Knud, in his late-eighties, worked tirelessly to accurately share the details and answer questions from American author Hoose two generations later, not familiar with Danish culture or language.  Hoose’s writing and research shines through the pages.  This is  a well-documented, first-rate and engaging nonfiction title that is not to be missed.  Highly recommended for all middle and high school collections.  Photos, epilogue, bibliography, and chapter notes add to this incredible story.
I undertook the reading of this book out of interest in the well-known Danish resistance of Nazi command of their government.  What I learned was that a group of teenagers was one match that sparked more to resist.  Initially, many (not all) Danish politicians and adults acquiesced to Nazi demands out of understanding of the high cost of resistance.  However, when the teenagers of the Churchill Club were caught and jailed, the shame felt by those same adults led them to action.  As a result, Denmark became a nation known for its refusal to allow Danish Jews to be removed to concentration camps.  Notably, in 1943, 7,200 Jews were wisely ferried out of the country by boat.  These actions and more might never have happened if not for these brave young men.  The details of their story are wonderfully shared by Knud Pedersen, and his pride in each member of the group is apparent.  Knud died in 2012, just as the manuscript was being completed for publication.  He died a recognized Danish hero, and he will inspire many young people to come.