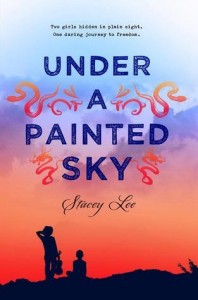 The year is 1849, and Samantha is a young Chinese girl living in Missouri with her father.  She longs to return to New York to pursue a career in music.  However, her plans change when her father perishes in a fire, and she finds herself wanted for the murder of a man who tried to rape her.  Luckily, she meets Annamae, a black slave who longs for her freedom.  The two girls decide to dress up as boys and run away to California via the Oregon Trail.  On the trail, they meet a group of cowboys who become their travel companions.  Throughout the journey, they face many difficult obstacles, including wild stampedes, cholera, lawmen on the lookout for criminals like themselves, and more.  As they begin to fall in love with two of their travel companions, they struggle to keep hiding their true gender.  A tale of friendship, love, survival and perseverance, this novel will resonate with fans of adventure and historical fiction.

Despite its three starred reviews, I wasn’t sure about this book when I first picked it up; it just sounded like another Wild West adventure story.  Boy, was I wrong!  The action picked up immediately, as a fire killed Samantha’s father in the first chapter, and Samantha killed her former landlord and rapist by the end of the third chapter.  From there on, the action only continued at a rapid pace.  I found myself unable to put the book down, wanting to know the answers to my questions.  Are the girls going to get caught by law enforcement officials?  Will the cowboys figure out that they are girls, and if so, will they love them back?  Will they make it to California on the Oregon Trail?  Besides being an exciting read, there were so many elements that made this book a great addition to any social studies curriculum or historical fiction collection.  There were many historical components incorporated into the story, including Oregon Trail landmarks, 19th century race relations, slavery, the Chinese zodiac and many other Chinese cultural elements.  I would definitely recommend this title for any school library!​