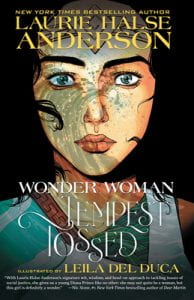 Themyscira, the secret island home of the Amazons, is protected by a barrier that shelters them from the outside world, although global conflict and human suffering weaken the barrier. On Princess Diana’s 16th “Born Day,” she breaks the rules to help refugees stranded at sea, and is trapped beyond the barrier. Days later, she washes ashore in Greece, now a refugee herself. Her skill with languages earns her a student visa to the United States. In New York city, “Diana Prince” learns about social justice issues (racism, income inequality, gentrification) through her feisty foster sister, Raissa. She also discovers that the square where Raissa and her friends practice parkour is an excellent makeshift training facility for an erstwhile Amazon. Through a free lunch program where the girls volunteer, Diana learns of a possible human trafficking ring, and she discovers her true purpose: protecting the most vulnerable. Sunny, high-contrast artwork in shades of turquoise, terra cotta, and blue-black perfectly frame a diverse cast, and especially Diana’s expressive face and body language.

THOUGHTS: Themes of preparing to be a warrior, fighting for what’s right, and forging a “found family” are always appealing to teen readers, and Wonder Woman finds an audience generation after generation. With Wonder Woman: Tempest Tossed, Laurie Halse Anderson joins Leigh Bardugo, Marie Lu, Matt de la Peña, and more top YA authors who are reinventing the superhero origin story. The title is a wink to Emma Lazarus’ poem, “The New Colossus,” and its famous line: “Send these, the homeless, tempest-tost to me.”