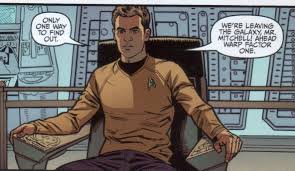 Get beamed up into these graphic novel tales featuring the Star Trek characters from the recent movie versions of the popular series. In The Galileo Seven, Spock is in command of a shuttle crew that is stranded on an unexplored planet. Cut off from communication with the Enterprise, the shuttle crew soon realizes they are not alone on the planet when they are the victim of a deadly attack. Meanwhile, back aboard the Enterprise, Capt. Kirk must decide how much time to expend on a search for his missing comrades before continuing on a time-sensitive mission. Ultimately both Spock and Kirk are forced to make difficult decisions that could result in the demise of the stranded crewmembers.

In Where No Man Has Gone Before, the USS Enterprise encounters an unknown force field in space. This force field causes the ship to be disabled, as well as the death of several crew.  Most disturbing, Capt. Kirk’s good friend Lt. Gary Mitchell begins to exhibit strange symptoms. He becomes very angry and confrontational, displays ESP-type symptoms and his eyes emit a strange glow. Clearly Mitchell has been taken over by an evil force. Given the situation (crippled ship, evil being onboard), Spock recommends that Mitchell be abandoned in space or killed. Kirk is thus forced to confront the evil force residing in his friend body in order to save the crew of the Enterprise.
Science Fiction, Graphic Novel                                                      Elizabeth Henry, Lampeter-Strasburg HS/MS

One not need to be a Star Trek aficionado to appreciate and enjoy these graphic novels. Both tales are action packed and in both cases, Volume 1 ends with a tense cliffhanger that had me eagerly reaching for Volume 2. Fans of the recent Star Trek movies will recognize not only the characters (the illustrations are based on the actors from the films), but also the characterizations. The phrases and vocal inflections present in the character dialogue are strongly reminiscent of the movie dialogue. Give this series to both “Trekkies” and science fiction fans alike! 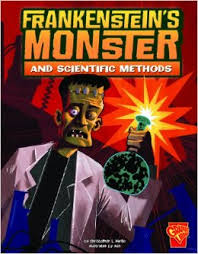 Weakland, Mark. Zombies and Electricity. 978-1-42969929-7.
The Monster Science series aims to engage students in  graphic-novel style books that present various scientific topics.  Each book features a type of monster that that is used to illustrate and demonstrate the scientific issue/principles being discussed.  For example, Zombies and Electricity features the undead doing various activities (brushing their hair, petting a cat) in order to generate static electricity.   The illustrations are engaging-full of humor and action packed (who knew there were so many ways to electrocute a zombie?!).  Sentences are kept short in order to avoid overwhelming readers with too much information at one time.  Definitions and diagrams are included to further explain the topic being discussed..  Each book includes a glossary, additional sources and web links.

Students can definitely find traditional science texts dry and difficult to understand, so I appreciated the authors’ laudable goal of engaging students in science by combing commonly studied topics with two things students enjoy: graphic novels and monsters.  The end result, however, was somewhat mixed.  The graphic novel elements of the story—the quality of illustration, the humor present in the scenes, etc. were good.  The integration of the science into the storyline, was not quite as seamless—some science facts were just hard to work into the plot. That said, I would still recommend this series to libraries looking to expand their non-fiction graphic novel collections and/or looking for new ways to engage students in reading and understanding science.