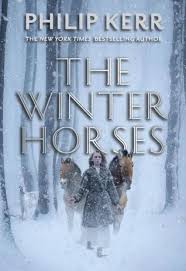 Kerr, Philip. The Winter Horses. New York: Alfred A. Knopf, 2014. 978-0-385-75544-3. $16.99. 278p. Gr. 6-8.
During the summer of 1941, Maxim Melnik cared for the animals on the Askaniya-Nova animal sanctuary located in the Ukraine, but the Przewalski horses fascinated him more than any other.  Warned of the sinister Nazi invasion and indisputable takeover of the reserve by the senior manager, Max held his ground assuming the Germans couldn’t be any worse than the Russians.  To his utter disbelief, they proved him wrong when their first order of business was to begin shooting the animals to feed their troops.  On the other side of the reserve, a young, orphaned Jewish girl meanders across the rugged steppe in search of food and shelter, trying to stay clear of any Nazis.  She stumbles upon two horses who see in her a comparable ally.  Max shortly discovers this unlikely trio and unconsciously vows to protect Kalinka and the last two Przewalski horses no matter the risk.  When Captain Grenzmann uncovers Kalinka’s hiding place, Max tries stalling to give Kalinka and the horses a head start.  Only the cunning intelligence of the Przewalski breed will outsmart the Nazis who are pursuing them across the Ukrainian wilderness.
The history of the Przewalski horses is extremely interesting.  They date back tens of thousands of years and are even pictured in the prehistoric paintings of Paleolithic men.  At the end of World War II, nine horses remained.  Protected and cared for, their number has grown to approximately 1500.  Kerr has added a fantastical element to her story and allows the reader to determine where the legend ends and history begins.
Historical Fiction       Christine Massey, JWP Middle School