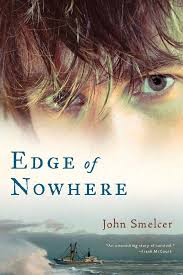 When Seth is 14, his mother is killed in a car accident.  Blaming his father and grieving over his mother, he falls into a depression, gaining weight and losing himself in video games and solitude.  Fishing season begins in the spring of his 16th year, and he boards the boat with his father, Jack, a commercial fisherman, Lucky, their deckhand, and Tucker, the family’s dog.  Jack is disappointed in his son and argues with him over his choices.  The last night of the trip, they have another heated exchange, ending with Jack at the helm, and Seth going to bed. Awakened in the middle of the night by rough seas, Seth realizes Tucker is not in the bunkhouse with him.  He goes up on deck to find the dog.  A raging storm is hammering down on the small commercial fishing boat.  Seth manages to grab Tucker just as a wave grabs both boy and dog and seep them overboard. Pulling into port in the morning, Jack realizes Seth and Tucker are missing.  Frantic, he begins his search to find the only remaining member of his family.  Washing ashore, Seth and Tucker have to survive by hunting and gathering throughout the Aleutian Islands.  Tapping into his Native Alaskan heritage and the stories his paternal grandmother told him as a child, Seth keeps himself and Tucker alive.  This story about survival and coming of age is a unique one, creating a sense of remorse on both the part of parent and child.  The author does an amazing job creating empathy at all ends.

This novel, one filled with suspense and determination keeps the reader on the edge of their seat.  Relationships between parents and their children often become strained in teenage years.  This book talks about the strain grief may have on that relationship. Seth gives up much of his food and shares it with his dog. Educators may use this as a resource to teach culture and ancestry, and its importance in the lives of students today.  The reader’s guide in the back of the book gives valid discussion questions, including the role of technology in the lives of teenagers today.  Even more, Seth relies on the stories of his grandmother to help in his survival.  She tells the stories of salmon and its eggs, and as Seth remembers the story, he turns that story into valuable information, feeding him and his dog one more time.  Students studying native cultures to the United States can gain some insight as to why cultures and heritage tend to die off.  This book was difficult to put down and at one point had my stomach in knots.