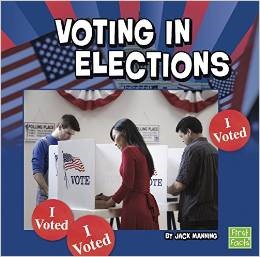 Manning, Jack. Voting in Elections. Mankato, Minnesota: Capstone Press, 2015.  978-1-4914-0334-1. $24.65. Gr. 1-3.​
As part of the “Our Government” series, Voting in Elections provides easy-to-read, detailed information about one of the most important rights that we have as Americans. Readers learn why voting is a meaningful part of being a U.S. citizen, how voting has changed throughout the years, where to vote, and how voting takes place. Each page includes the main text, along with supporting color photographs and glossary boxes. While there is also a glossary in the back of the book, including a glossary box of complex words on each page is especially useful for young readers. Other titles in this series include: The City Mayor, Serving on a Jury, and The State Governor.
324.6 Voting, Elections, Government   Lisa Naylor, Concord Elementary 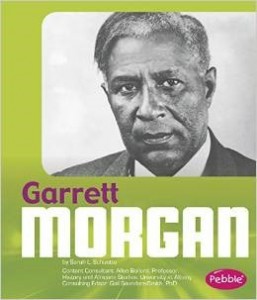 Schuette, Sarah L. Garrett Morgan. Mankato, Minnesota: Capstone Press, 2015.  978-1-4914-0504-8. $21.32. Gr. K-2.
As part of the “Great African-Americans” series, this book introduces readers to the successful life of inventor and entrepreneur Garrett Morgan. Morgan is best known for inventing a safety hood for firefighters and soldiers as well as a traffic signal which has been so effective, it is still used to this day! Each page in this informative yet simple biographical profile includes photographs and even sketches of some of his inventions. There is also a timeline on the bottom of each page that continues to expand as readers learn more about Morgan’s life. This is a great choice for young students working on biographical research or a Black History Month project. It is easy-to-read yet still very thought-provoking and appealing.  Other titles in this series include Benjamin Banneker, Frederick Douglass, Jackie Robinson, W.E.B DuBois, and Wilma Rudolph.
Biography, Inventors   Lisa Naylor, Concord Elementary 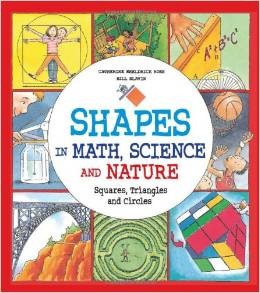 Ross, Sheldrick Catherine. Shapes in Math, Science and Nature: Squares, Triangles and Circles. New York: Kids Can Press, 2014.  978-1-77138-124-6. $19.50. Gr. 3-6.
Originally published as three separate books, Shapes in Math, Science and Nature has now been reprinted into one, easily accessible compilation. The focus of this book is on squares, triangles, and circles, and interestingly offers much more than one could possibly imagine about these basic shapes. Topics in each shape range from science and math lessons to language and history lessons. Projects, puzzles, games, and fascinating anecdotes are all included along with colorful illustrations to help readers connect with the text. With so many different perspectives presented, the audience is likely to extend far beyond science and math lovers.
516 Mathematics, Geometry   Lisa Naylor, Concord Elementary