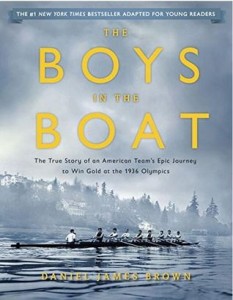 The Great Depression was a difficult time for millions of people, including young Joe Rantz, who was forced out of his home because his family couldn’t care for him.  Although Joe went back to his family, he was later sent away by his new stepmother who didn’t want any reminders of her husband’s previous family.  In order to survive, Joe worked hard and learned to be self-reliant.  He was bright and realized that college would enable him to achieve the financial independence he needed.  He was accepted by the University of Washington in Seattle and tried out for the rowing team in order to stay at the university.  Many of Joe’s teammates on the rowing team were in a similar position; they didn’t come from wealthy families and were used to hard physical labor.  The boys on the boat were strong, but they were also insecure and didn’t know how to work together as a team.  As they began to connect and rely on each other, they started to win against more skilled teams from California and the East Coast.  Finally, they found the perfect synchrony that only exists in the best rowing teams, and they were on the path to the 1936 Olympics in Berlin.

Although this book is supposed to be about the entire University of Washington rowing team that went to the Berlin Olympics, it is arguably Joe Rantz’s story.  His life circumstances were almost unimaginably tragic, but he constantly picked himself up and worked to improve his situation.  This aspect of the story alone makes The Boys in the Boat a worthy read for students.  Although I  didn’t find the coach’s speeches and the race descriptions to be that interesting, the human aspects of the story are engaging.  The book’s treatment of Nazi Germany during the 1936 Olympics is somewhat controversial; the author portrays Germany as the rowers saw it, a friendly and scenic European country.  They seemed to have little awareness of Hitler’s treatment of the Jews and the coming storm.  On a final note, this book is very strong in the amount of supporting documentation it offers; there are many photographs, a timeline, a diagram/ description of the “art of rowing”, and a notes/ index section that will be included in the final version of the book.  The Boys in the Boat will be a wonderful addition to any middle grade library.