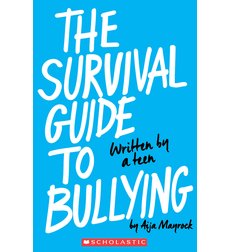 Mayrock, now nineteen years old, endured bullying during middle and high school. The reasons aren’t clear, just that she was chosen to be “it.” In fact, she was told by a classmate, “It’s not personal. It’s just you.” Out of the confusion and fear and pain, when she emerged, she realized she had to write a book. Her creativity flourishing (she wrote a sceenplay (about bullying) the day of the deadline and won the Santa Barbara International Film Festival), she decided to use words to help those still struggling with bullying. She opens each chapter with a “roem”, her own term for a rap poem. The guide offers short assessments for readers to define their bullying and “six stepping stones to the real you” including: embrace your creativity, believe what you really believe, and become the real you in school. She repeatedly tells readers to talk with parents and teachers, even offering verbal and written scripts for how to approach the matter. One chapter covers tactics for smartly maneuvering difficult school scenarios (hallways, lunchroom, locker room, classroom); another chapter takes on cyberbullying with several good insights, the best—and toughest—being “go dark,” that is, take a short or long-term break from social media. The book does lack insight on how one’s faith might prove helpful or how to build a legal case against bullies, but these are not Mayrock’s emphases. She simply wants to provide a book of hope to those in the “dark tunnel.” And at this, she succeeds. The book ends with a list of online resources.  THOUGHTS: The slim size of this volume and the inviting interior make this a non-threatening way for teens to combat bullying by changing their views of themselves. Combine with Words Wound: How to Delete Cyberbullying and Make Kindness Go Viral (2015) for greater online insight, Hey, Back Off! Tips for Stopping Teen Harassment (2011), Paige Rawl’s Positive: Surviving My Bullies, Finding Hope, and Living to Change the World and Rosen’s I Have Been Cyberbullied, Now What? (2016). Recommended for grades 5-12. Discussion Guide is available via Titlewave entry.