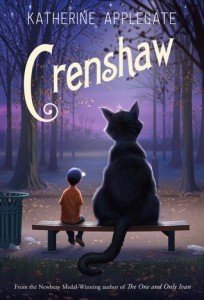 Jackson is a rising fifth grader with some very grown-up problems. His family has fallen on hard times, due to his dad’s struggle with MS and his mom being laid off from her job as a music teacher. (Applegate makes a subtle point here as she simply mentions a music program being cut.) Money is tight, leading to hungry nights and yard sales of the family’s belongings. Jackson, a firm believer in science and facts, wishes his parents would be honest with him about their situation and fears the family will again be living out of their minivan. This serious storyline mixes in with Jackson’s imaginary friend Crenshaw, a huge cat that remakes his appearance for the first time in years. Crenshaw’s calm wisdom at first irritates Jackson who tries to rationalize his existence. He eventually realized that the best advice comes from Crenshaw – that he, Jackson, can make his own decisions and needs to be honest with himself first.  THOUGHTS: A story about friendship, love, loss, and what really matters, this book is sure to touch readers. I would recommend it as a read-aloud for grades 3-4 so there can be appropriate discussion. It definitely makes you think about what is important! A worthy follow-up to Applegate’s The One and Only Ivan.