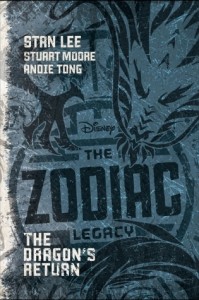 The powers of the Chinese zodiac, held by a select group of people throughout the world, have been concentrated in two groups: one led by Jasmine and the other led by the evil Maxwell.  As the book opens, the dragon power (the greatest power in the zodiac) is held by Jasmine, but Maxwell is working to strip Jasmine’s team of its abilities and take on all of the power himself-  something that would make him completely indestructible.  Loyalties on both sides are shifting, however, and Jasmine is vulnerable because her partner, Carlos, has disappeared.  Maxwell takes advantage of the fragile state of the group and kidnaps Steven Lee, the story’s main protagonist.  Other disappearances follow, and toward the end of the book, it appears that Maxwell will reach his goal.  Will Jasmine recover her focus in time to save her team?  THOUGHTS: Although this second volume of The Zodiac Legacy series is not as original as its predecessor, it is a required purchase for any library that owns the first volume.  The Dragon’s Return is not a stand-alone book; it is necessary to have read  Convergence in order to appreciate the Zodiac members’ world. The Dragon’s Return  is clearly laying the ground for what should be a stunning finale to the trilogy.

The Dragon’s Return suffers from many of the shortcomings that second books in a trilogy often do.  We’ve met the characters and are now coming to understand their motivations.  The triumphant end to the first book has been forgotten and the Zodiac members (both from Jasmine’s team and Maxwell’s Vanguard team) are questioning their alliances.  Why is this series something special?  The Zodiacs are a diverse group. They are young and older, male and female, and are of  different ethnicities.  The book is clearly meant to appeal to tween/ teen males, but the girls “kick butt”; there is no shortage of strong female characters.  Andi Tong’s illustrations have many of the stylistic elements of comic book art (without the too-grown-up aspects) and there are many of them throughout the novel.  This series is excellent for students who are transitioning from graphica to traditional fiction. 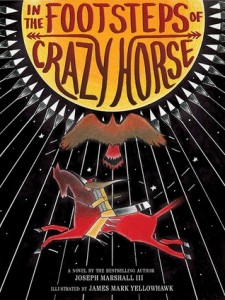 While Jesse Little Horse and Corky Brin don’t always get along due to their heritage, they have formed a provisional truce when it comes to Jimmy McClean.  Jimmy is three parts Lakota and one part white, so the school bullies tease him for pretending to be white or because of his light blue eyes.  His only safe haven is near the river where nature accepts him without condition.  With summer break around the corner, Jimmy is relieved to get away from the boys.  To his amazement, Grandpa Nyles High Eagle is taking him on a road trip.  They will trace the life of Light Hair, a young Lakota boy who was also teased until he grew into the young man better known as Crazy Horse.  At each stop, Grandpa Nyles practices the art of oral storytelling and brings the events to life so clearly that Jimmy can hear the pounding of the horses’ hooves across the prairie or envision hundreds of warriors preparing for battle.  With each stop along the trip, his grandpa continues the story, including the heartbreak, the trials, and victories Crazy Horse lived.  By the end of the summer, Jimmy has learned that a brave warrior will face his fears no matter how scary they may be yet maintain his character and modesty during the journey.  THOUGHTS: Integrating nonfiction and the tradition of oral storytelling through the perspective of the Lakota Indians, Marshall captivates readers and takes them on a “visionary journey” where history comes alive.