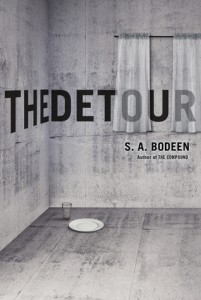 Livvy Flynn is a seventeen year old bestselling author of a fantasy book series.  She thinks she has it made; she has overcome being the victim of bullying when she was younger. Now she’s wealthy and successful with a sporty car and a serious boyfriend she met online.  Livvy is on her way to present at a writer’s retreat when she is forced to take a detour and wrecks her car.  When a woman and her daughter arrive on the scene, Livvy thinks everything will be alright.  But, she soon finds herself kidnapped by the aspire and locked in a basement.  Injured from the crash, Livvy plots a possible means of escape.  She also tries to determine why Peg and her daughter are so angry with her.  There seems to be a purpose and motivation to Peg’s rage.  Livvy uses the hours spent in the basement to reflect on her past.  Could she have encountered Peg on her rise to the top of the publishing world?  THOUGHTS:  The Detour is a tightly paced young adult homage to Stephen King’s Misery.  Though the character of Livvy is somewhat hard to warm up to (she is fairly self-centered at the outset), readers will find themselves engaged in trying to determine the motivation behind Livvy’s kidnapping. 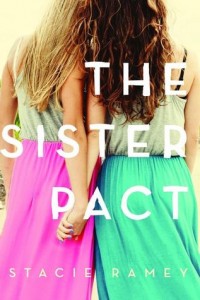 Allie is overcome with grief when her older sister Leah commits suicide.  She can’t understand why she was left behind.  After all, she and Leah promised one another they would be together in life and in death, but Leah broke the pact.  Now Allie is left to deal with their broken and dysfunctional family as well as cope with well-meaning peers.  To help deal with the pain, Allie begins to self-medicate, mixing over the counter medication and pills to help get her through the days.  As her life seemingly spins out of control, Allie discovers there were secrets that Leah kept from her, and that despite Leah’s influence over her, she didn’t really know her sister at all.  Ultimately, Allie must come to terms with her loss and begin to move forward and live again.  THOUGHTS:  This a potent story of betrayal, loss and grief, and how to forgive and move forward without the person who is no longer there.  While the storyline and topics tackled are intense, readers will find themselves thinking about this thought-provoking story long after they have turned the final page.

Hello, Goodbye and Everything in Between follows teen couple Clare and Aiden over the course of one night.  This is not a typical night, however.  In the morning these high school sweethearts will go their separate ways to begin their freshman year of college; Clare on the East Coast and Aiden on the West Coast.  What should they do: break up or try to maintain a long-distance relationship?  Over the course of their final night together, they will retrace their relationship, traveling to locations that have special meaning, as well as meeting up with friends and family.  Throughout the night they will engage in heartfelt conversation, tell honest truths, have arguments, shed tears, and share declarations of love.  But, when the morning arrives, Clare and Aiden must decide: is this truly the end of their relationship?  THOUGHTS:  This romance explores an aspect of teen relationships that is not often shown in YA lit – what happens when high school is over.  Readers will feel Clare and Aiden’s turmoil as they struggle to reach and accept the inevitable decision they must make.  Fans of Smith’s earlier works will not be disappointed.